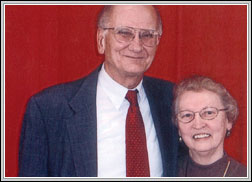 When William E. Blake Jr. started a fund upon retiring from Virginia Commonwealth University’s Department of History in 1992, he had relatively humble aspirations for its growth. The William E. and Miriam S. Blake Fund’s primary goal was supporting an annual lectureship in Blake’s area of interest, the history of Christianity. In 14 years, the fund has ballooned from the Blakes’ initial $25,000 donation to more than $120,000.

By 2004, the fund could easily provide funding for the annual William E. and Miriam S. Blake Lecture in the History of Christianity. About this time, Blake acknowledged that the fund’s intent might shift to creating a chair in his beloved field.

Little did he know that his dream would become a reality through the generosity of an anonymous benefactor who donated funds to reach the $1 million needed to endow a chair in the history of Christianity this spring. “My wife’s and my mouth fell open. We couldn’t believe our ears,” Blake said.

The creation of the William E. and Miriam S. Blake Chair in the History of Christianity is, for Blake, the realization of a career-long dream. Before establishing a chair was even an option, Blake’s grass-roots fundraising - basically handing out fliers - to support the annual lectures saw only modest returns.

“Several people gave $100. One person gave $1,000 as a result of that, but I never dreamed that this was going to happen in my lifetime,” he said.

Blake has been giving back to the university since he started teaching full time in 1965, so it’s only fitting that his legacy to VCU will be cemented through the generosity of students and other donors.

“The university and its students have just meant the world to me, and I still teach a course here. I’ve taught at least one course just about every year since I retired in ’92,” he said.

Blake, who had an interest in theology and history back to his earliest memories, started his VCU teaching career with courses in four eras: Renaissance, Reformation, Early Middle Ages and High Middle Ages. Given that these courses already covered roughly 1,000 years of Christianity’s history, a colleague suggested Blake condense the information into a single course. Nearly 30 years later, Blake has taught the course he created, “History of Christianity,” 35 times.

Considering his deep passion for the subject, Blake said he is overjoyed that the history department can create a chair in his name.

For more information about contributing to the William E. and Miriam S. Blake Fund or other areas in the College of Humanities and Sciences, contact Lois Badey, director of development, at (804) 827-0856.