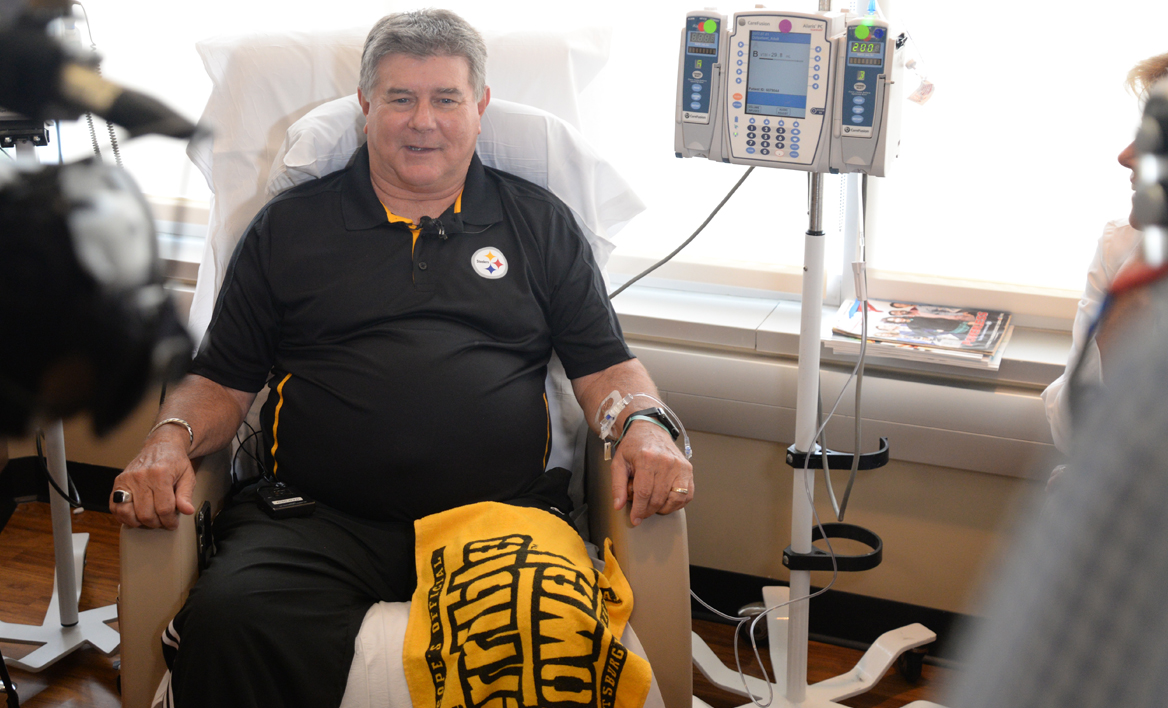 So far this year, Jerry Creehan, 64, has traveled to Aruba, Italy and Florida, and he attended the PGA Championship in Char­lotte, North Carolina. From his travel calendar, you would never guess that less than a year ago, he had been diagnosed with amyotrophic lateral sclerosis.

ALS, also known as Lou Gehrig’s disease, is a progressive disease that affects nerve cells in the brain and spinal cord. Over time, the loss of the motor neurons that control muscle movement hinders mobility and vital functions, such as speech, swallowing and breathing. Life expectancy with ALS varies, but the average patient lives with the disease for two to five years after diagnosis.

Since his diagnosis in February, Creehan has received care at the Virginia Commonwealth University Neuromuscular and ALS Clinics, where a multidisciplinary team of providers has helped him manage the effects of his disease and continue to enjoy life.

“At my first appointment, they told me they want their patients to continue living their lives to the fullest,” he says. “They’ve been very supportive of me so far.”

VCU’s ALS clinic moved into the VCU Health Neurosci­ence, Orthopaedic and Wellness Center in Henrico, Virginia, in 2016. The new clinic is larger than the one it previously shared with VCU’s Parkinson’s and Movement Disorders Center, which also moved to the NOW Center last year, and provides the space needed to accommodate a full team of specialists.

“We like to say our clinic is a one-stop shop,” says Scott Vota, D.O. (H.S.’06/M), chairman of the Department of Neurology in the VCU School of Medicine and director of the Neuromus­cular and ALS Clinics at VCU.

Vota is one of three neurologists at the clinic. The team also includes a physical therapist, a registered dietician, a respiratory therapist and several other specialists who all provide care specific to the unique needs of ALS patients.

“We have all of those providers at one location so that our pa­tients can receive the most convenient care possible,” Vota says.

The clinic’s new location prioritizes accessibility, with wide hallways and sliding doors that can be easily navigated by patients with limited mobility.

“Those details may go unnoticed by someone who isn’t wheel­chair-bound, but it makes a big difference to people like me,” Creehan says.

LOOKING TO THE FUTURE

The clinic is providing optimal care for patients like Creehan in part because of the Harper’s Hope Fund.

The fund was conceived by another ALS patient, Victor Harper, who died in February 2014. As he learned more about the disease, he grew passionate about finding a way to help other patients.

“If we could raise enough money to help people that I will never see and never know, my family and myself will be very happy,” Harper said in 2014.

Later that year, friends and family made donations in Harp­er’s memory to establish the Harper’s Hope Fund. Thanks to proceeds from the annual Harper’s Hope Golf Tournament and Auction and several other fundraisers, the fund grows each year, and Harper’s hopes for a better future for ALS patients seem more attainable than ever.

In 2016, two new team members were hired to help fulfill the Harper’s Hope mission. Tamika Walthour is a full-time clinical research coordinator who connects patients with clini­cal trials to develop new treatments, and licensed clinical social worker Melissa Byrne provides patient outreach and education services. A portion of their salaries is covered by the fund.

“Our family is so excited about the work the clinic is doing for ALS patients,” Harper’s wife, Anne, says. “Vic always said that if Harper’s Hope could make a difference in just one patient’s life, he would be happy. He would be so proud of what the fund has accomplished so far.”

Creehan still remembers how grateful he felt when he learned how much the quality of his care had been influenced by Harper’s Hope. Now, he’s looking forward to finding ways to help raise money for the fund.

“Knowing what Harper’s Hope is doing for patients like me motivates me to pay it forward so that their work can contin­ue,” he says.

MCV Foundation President Margaret Ann Bollmeier says that philanthropic support is essential in supporting the life­saving care, research and education that happens on the MCV Campus and beyond every day.

“The generous donor and volunteer involvement we’ve seen over three years surrounding the Harper’s Hope Fund has been inspiring,” she says. “Vic Harper’s hope to improve the lives of those suffering from ALS is living on and coming to fruition thanks to his friends, family and the community.”