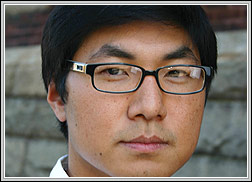 Mass Communications major sets his sites on an advertising career

At 13, Dong-Hyok So knew he wanted to pursue a career in advertising. Inspired by a global Coca-Cola commercial he saw on TV in his native Seoul, Korea, and bolstered by his great-aunt’s belief in his creativity, So earned an associate’s degree in advertising from the Seoul Institute of Arts.

Born and raised in Seoul, So decided in his early 20s that he wanted to experience something new. After earning his associate’s degree, So decided to move to the U.S. to pursue a bachelor’s in advertising.

Since entering Virginia Commonwealth University’s School of Mass Communications in 2003, So has dedicated himself to his work as an advertising student. He has lived with his great-aunt in Richmond throughout his college career at VCU.

So, who has made the dean’s list every semester of his studies at VCU, has been recognized for his achievements as an honors student and has received several scholarships, including the Joseph Mason Scholarship, the Martin Agency Endowed Scholarship and the Virginia Communications Hall of Fame Scholarship.

So says he is honored to receive each one of these awards.

“I am very grateful for the college system here, and them recognizing students who have merit,” said So, who is known as “DH” around the school.

Paula Otto, associate director of VCU’s School of Mass Communications and So’s academic adviser, is impressed by So’s focus and dedication to advertising.

“Dong-Hyok is passionate about his studies and about the advertising industry. From the first time I met him, as he was transitioning from community college to VCU, I was impressed with his focus, his organization and his willingness to work very hard in order to realize his goals,” Otto said.

So earned these accolades despite the tough initial adjustment to an educational system in a different country. Korea’s school curriculum and discipline is very different than that of the U.S. For example, the classes are larger and formal language is spoken with professors.

“In Korea, [the] classroom is more disciplined, so sometimes [at VCU] it is more difficult to understand,” So said.

Now, as a senior, So feels that he has adjusted and enjoys the open and comfortable classrooms.

After graduation in May 2007, So hopes to start an advertising career, focusing on humanities, on the West Coast or in New York.

“I want to contribute to social marketing. I want to educate people using advertising as a vehicle for people to be aware of what is going on around them,” he said.

Otto is confident in So’s future career goals and success in advertising.

“I know Dong-Hyok is anxious to begin working in the advertising field after he graduates.  It’s not an easy field to break into; however, I have no doubt Dong-Hyok will succeed and make VCU proud,” Otto said.

To make a gift to the VCUSchool of Mass Communications, contact Audrey K. Thomson, director of development, at (804) 827-3761 or akthomson@vcu.edu.