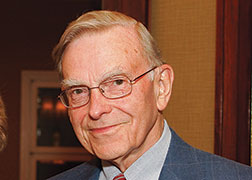 When Dr. Bruce “Al” Baber (M.D. ’57) came to campus for Reunion Weekend in April 2010, he talked with some impressive Virginia Commonwealth University School of Medicine students. One of the students was about to receive top honors at graduation and go into family practice. That encounter brought back Baber’s memories of his own days on the MCV Campus.

“I remember very well the old A.D. Williams Clinic and our sessions there. Tuition was $675 per semester, which is really something compared to what they have to go through now,” he said. “I thought that one way I could help, in some small way, was to make a contribution back. It’s great to see these students with intelligent minds going onward. When I look at the gift I made, I consider myself a small fish in a big pond really.”

Baber, a retired anesthesiologist in Newport News, Va., has made a financial commitment in support of a new School of Medicine education building, which is slated for completion in spring 2013. The gift is divided between a $10,000 pledge and a $50,000 bequest. By structuring his gift in this manner, he is contributing critical cash to the campaign now as well as leaving a future gift of significant impact.

His gift will help the school reach its $37 million private-gifts goal of the public-private partnership to construct the new building, which will provide new instructional and simulation space and will allow for expanded enrollment.

Baber took his commitment a step further after attending a dinner featuring School of Medicine Dean Jerome F. Strauss III, M.D., Ph.D., who shared his vision for the future of medical education on the MCV Campus. Baber decided to encourage seven of his classmates to participate in the campaign, too, by sending personal letters.

“I’ve never been much of a solicitor. It’s not my usual customary operation at all,” he said. “I’ve never been a good salesman and have resisted these things all my life.”

His letters, though, clearly illustrated his desire to give back and why it’s important for others to consider:

“Looking back upon my years in medicine, I think of the ways in which MCV guided me into a profession in which we can all be extremely proud. Therefore, I can think of no better way to help the future students than contributing to the construction of the new MCV School of Medicine educational building. This capital campaign needs and deserves the support of all our alumni.”

Baber drew some support from his classmates and he hopes the alumni giving will continue.

“I had considered giving back to MCV in the past, but it struck me as something more urgent at this point in my life,” he said.

By including the medical school in his estate plans, Baber also joins the ranks of the MCV Society, whose members have provided future support to the MCV Campus through their planned gifts. In addition to charitable will bequests, such as Baber’s, planned gifts include charitable remainder trusts, gift annuities and pooled income funds.

“This is the first major campaign for a capital building project in the School of Medicine’s history, and it has been enormously gratifying to see so many alumni of the school step forward with generous gifts in the early stage of the campaign,” said Tom Holland, associate dean for development in the VCU School of Medicine.

To learn more about tax-wise planned giving options or the campaign for the VCU School of Medicine, contact Tom Holland, associate dean for development in the school, at (800) 332-8813 or teholland@vcu.edu.