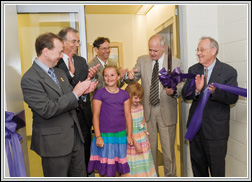 The Virginia Commonwealth University School of Dentistry’s dedication of its new W. Baxter Perkinson, Jr. Building in mid-June signaled a renaissance occurring on the MCV Campus.

The building is just one of many on the campus being built and undergoing renovations, such as the state-of-the-art Critical Care Hospital, a revamped Larrick Student Center and an upcoming new School of Medicine building.

The $20 million Perkinson Building is named in honor of Dr. W. Baxter Perkinson Jr. (D.D.S. ’70) whose $2.5 million gift in 2006 was the largest in the school’s 113-year history. The building opened when classes resumed in August.

The four-story, 55,000-square-foot structure connects the existing School of Dentistry’s Wood and Lyons buildings and enables the school to increase student enrollment in dentistry from 90 to 100 students and in dental hygiene from 20 to 40 students annually, to expand research and to improve patient access to care.

The new facility includes dental and periodontics clinics and an off-street drop off and pick-up area for patients. The building also increases the school’s laboratory space for the Philips Institute of Oral and Craniofacial Molecular Biology. The Philips Institute, established in 1999, is the hub of oral and dental research at the dental school.

School of Dentistry Dean Dr. Ronald J. Hunt calls the new building a major milestone, allowing the school to provide a better learning environment for its students and better care for patients throughout the state.

“The VCU School of Dentistry’s mission has always been about meeting the oral health care needs of Virginians,” Hunt said. “The learning, patient care and scientific discovery that will take place within the walls of this new building will continue to bring that mission to life, inspiring future generations of dental professionals.”

That sentiment was echoed by Dr. Sheldon M. Retchin, vice president for VCU Health Sciences and CEO of the VCU Health System.

“Imagine looking back in 25 years at all the wonderful accomplishments that will happen here,” he said.

Perkinson has been an advocate of VCU since his days as a dental student. Following his graduation, Perkinson worked as an adjunct professor in the school until his retirement last year.

His dental practice is the largest in the state.

Perkinson is a former rector of the Board of Visitors and a current member of the VCU Health System Authority board of directors. In the past, he served on the MCV Foundation board of trustees, the School of Dentistry advisory board and the Rice Center advisory board.

In addition to his many achievements in dentistry, Perkinson is an accomplished artist. He donated more than 200 original watercolors to be displayed in the new building as well as in the Wood and Lyon buildings, echoing his earlier gift of 128 watercolors to the School of Nursing building, which opened in 2007.

Perkinson has received numerous honors from VCU, including the Presidential Medallion, the MCV Dental Faculty Award and the School of Dentistry Medallion. He also received the American Dental Association’s first Golden Apple Award for Outstanding Leadership in Mentoring.

Over the years, Perkinson has been extremely generous to his alma mater, making gifts to the schools of Dentistry, Nursing and the Arts as well as the Massey Cancer Center.

“It’s hard to find someone who works so hard and with such enthusiasm as Baxter,” Dr. Trani said.

To Perkinson, his motivation is simple: “There ain’t a place in the world like VCU.”