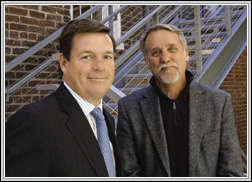 Partnership ushers in next generation of radio ads

Virginia Commonwealth University Brandcenter Director Rick Boyko believes that radio advertising, which he calls “theater of the mind,” has long been overlooked in the industry.

“I think for a long time the medium’s been under-leveraged. It’s a great form to tell stories in a serialized way,” he said.

Now Boyko can champion this cause thanks to a new partnership with the Radio Advertising Bureau, an organization that aims to organize and improve sales and marketing in the radio industry. To that end, the bureau has pledged $250,000 over the next five years to fund a new curriculum in radio advertising at the Brandcenter.

Radio Advertising Bureau President and CEO Jeff Haley sees this new partnership as a step toward bringing radio advertising into the 21st century.

“People are listening to radio on their cell phones, desktops, audio on BlackBerrys, etc., and the ads haven’t necessarily kept up. … [Radio advertising] hasn’t challenged itself to shift with the way the culture has shifted,” he said. “Through these efforts with the VCU Brandcenter, we’re going to do something that’s going to kind of solve that.”

Radio advertising offers many advantages over other advertising media because it relies on the imagination of the listener and the creativity of its developers, Haley said.

“You can create things in radio that would be incredibly costly to create in other media. I can talk about eating ice cream on Mars and people can imagine what that’d be like. That wouldn’t be easy to create compellingly in a visual ad. I think it is that imagination and those images can be brought to mind individually across many listeners at once that is very compelling,” he said.

The new curriculum at the VCU Brandcenter will introduce students to the advantages of radio advertising and will foster the creative thinking that should help them create more imaginative and effective ads as professionals, Boyko said. The changes will occur in an existing class, which will offer the additional material beginning this fall.

“They’ll get a better understanding of how the medium can be used and challenge them to challenge the industry to look at radio as a great form of storytelling and a mass communication tool,” Boyko said.

The Radio Advertising Bureau is proud to have partnered with VCU, Haley said.

“VCU stands clearly at the forefront as one of the best portfolio schools in the country. They’re focused on doing real work and have one of the best breeds of creative staff on faculty. It’s really unique. We recognized that and wanted to take advantage of it,” he said.

To make a gift to the VCU Brandcenter, contact Beth Harrington, senior director of development, at (804) 828-8384 or ekharrington@vcu.edu.