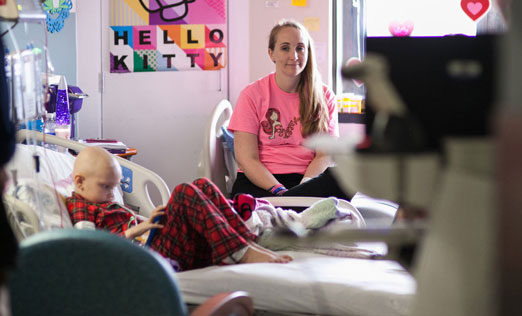 The date is incised in Amanda Whatley’s memory. Jan. 24, 2015: The day her 6-yearold daughter’s childhood trappings shifted from unicorns and Legos to IV poles and chemo ports.

Katie Whatley was diagnosed with T-cell acute lymphoblastic leukemia, a cancer that ultimately required two years of treatment at Children’s Hospital of Richmond at VCU. Katie and her mother commuted from Norfolk, Virginia, to Richmond, Virginia, while her father, Marine Staff Sgt. Joshua Whatley, two brothers and a baby sister soldiered on at home.

In October that year, with Katie fighting loneliness, boredom and the harsh effects of chemotherapy, the family received a gift they considered life-changing. Katie was paired with five first-year Virginia Commonwealth University School of Medicine students from SMILE (Students Making It a Little Easier), a program that provides “big buddies” to pediatric cancer patients being treated at VCU Medical Center.

“They made an absolutely huge change in our treatment,” Amanda Whatley says.

One of Katie’s buddies was Mark Feger. The future orthopaedist is a recipient of the School of Medicine’s Mary Joanne Devine Rust Scholarship, which helps the school recruit scholars by covering the equivalent of a third of their in-state tuition, about $10,000, each year. The criteria is academic merit and financial need.

“We would be heading to the hospital, and she would be like, ‘Which one of my SMILE buddies is coming? Did you text them? Are they coming?’” Whatley recalls. “We met them in the operating room, in radiology; they would come to wait with her for scans. They were excited to stay with her and follow her. And they were just excited at the prospect of having a kid to latch onto and love and take care of.”

The emotional investment ran deep on both sides, Feger says. “We shared in their hope and excitement when treatment was working, and we also shared in their concern, sadness and fear when there was a relapse,” he says. “We all thought that the SMILE program would be a rewarding experience, but I don’t think any of us really appreciated that our SMILE buddies would soon feel like family.”

When Katie relapsed and was fast-tracked for a bone marrow transplant in December 2015, Whatley called the SMILE buddies first. The students entertained Katie as she awaited her transplant and provided a respite for Whatley. When a fellow pediatric cancer patient died, Feger’s wife, Hailey, who also had “adopted” the Whatley family, stayed with Katie so that Whatley could attend the funeral.

Now in his final year of medical school, Feger has earned the Rust Scholarship for a fourth straight year. The scholarship fund was created in memory of Mary Joanne Devine Rust, M.D. (M.D.’81/M), who was 33 when she and her husband were killed in a car crash on Interstate 95 near Rocky Mount, North Carolina, in 1989.

Rust’s mother, Grace Devine, bequeathed her estate in 2012 to the MCV Foundation to establish the Rust Scholarship. It is part of the School of Medicine’s $25 million 1838 Campaign to raise scholarship funds for deserving medical students.

“Dr. Rust is no longer able to directly improve or save patients’ lives,” Feger says, “but she will always make a difference in the lives of patients indirectly, through the hands of the students who benefit from the scholarship program.”

The scholarship inspires Feger to make a difference in patients’ lives not just as a future doctor but also in his extracurricular activities. In addition to SMILE, he volunteers with Richmond Sportable, an organization that involves individuals with physical and visual disabilities in sports by providing adaptive race bikes, wheelchairs and prosthetics.

“VCU has very passionate and humanistic physicians, and the scholarship program allows the School of Medicine to bring in students with these same intangible characteristics,” Feger says. “It also encourages VCU students to pursue extracurricular activities like I have been fortunate enough to participate in, so that the experience can be tailored to each student’s personal and professional interests and goals.”

He also has become a top-notch researcher.

With a kinesiology degree from Albion College in Michigan, a master’s and a Ph.D. from the University of Virginia along with an impressive resume of extracurricular activities and community service, Feger arrived at VCU with an interest in clinical and biomechanical assessment of musculoskeletal injuries. In each year of medical school, he has worked in the Orthopaedic Microsurgery Lab at VCU with Jonathan Isaacs, M.D., vice chair of research and education in the Department of Orthopaedic Surgery at the School of Medicine, participating in experiments as well as data collection and interpretation for a project studying methods of enhancing muscle recovery after traumatic nerve damage.

“We looked at a question from multiple angles, and as we collected data points, Mark not only vocally and confidently participated, he without a doubt influenced our thought processes,” Isaacs says. “He spent many hours in the lab and was truly dedicated to the scientific effort. In fact, the following year, he found time in his schedule to return to the lab and continue making invaluable contributions.”

Feger credits his scholarship with removing some debt pressure so that he can explore his chosen field of medicine and engage in volunteer work. “Scholarships make it so that the stress of loans and worrying about how much you’re borrowing is relieved,” Feger says. “They let you focus on your course work and other things that you either enjoy doing or that you can do to help set yourself apart when you’re applying for residencies.”

Michelle Whitehurst-Cook, M.D. (MD.’79/M), senior associate dean for admissions in the School of Medicine, says scholarships are vital if VCU is to compete for top scholars with schools that have lower tuition. “Over the past five years, the indebtedness of our students has increased and is higher than the national average for public medical schools,” she says.

Debt load can also negatively impact students’ future decisions. “In the Class of 2018, graduating students with debt carried an average of more than $200,000 in debt,” Whitehurst-Cook says. “Any scholarship support they receive to decrease their principal and decrease the amount of money they have to borrow makes it easier on them and helps them select careers they more likely would have chosen if they weren’t in such heavy debt. An example is primary care, where our need is greater. But sometimes they reach for specialties because they’re going to pay their debts off a little faster.”

Feger’s accomplishments are a source of pride for Rust’s family. Jane Higham, the niece of Grace Devine and the family representative for the Rust Scholarship, has met Feger twice at the annual MCV Foundation Endowed Scholarship Brunch and says it’s rewarding to ease the journey for future doctors.

“It’s so hard; it’s so intense,” says Higham, who is also grandmother to a second-year VCU School of Medicine student. “It’s helpful to the student to know that they’ve got some money to lead them on and help them meet their dreams.”

Recent tests show Katie Whatley is cancer-free. The family has moved to Lanexa, Virginia, to be closer to Children’s Hospital of Richmond at VCU for her ongoing care, and they plan to fulfill a long-held promise to attend the buddies’ medical school graduation this May.

Feger says it’s more challenging to change a patient’s life as a student than as an attending physician. “We make small contributions,” he says.

“There are things we can do outside the classroom, like the SMILE program, being with the same patient over and over, establishing a relationship that way, spending time with them and their family, seeing their struggles and trying to find ways to make it easier,” Feger says. “I definitely think that’s one way I’ve been able to make an impact.”

To learn more about the Mary Joanne Devine Rust Scholarship or the 1838 Campaign, contact Amy Lane, Ph.D., interim associate dean for development, VCU School of Medicine, at (804) 827-4937 or amy.lane@vcuhealth.org.