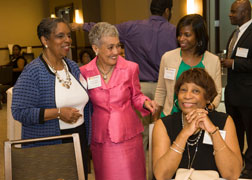 An underdog disease finds a champion

Florence Neal Cooper-Smith (M.S.’85/M) became aware of sickle cell disease in 1942, 34 years after the first known case presented itself in the United States.

Her lifelong dedication to the disease began during a routine childhood trip to the family doctor. During her visits, she often waited in the doctor’s office rather than in the waiting room. Once, she found a book to read and stumbled on a few new words: hematology and sickle cell anemia.

“It hit me. Sickle cell was a disease in colored people, that was the terminology back then,” she remembered. “You were born with it, there was no cure and you died early. That stuck with me.

“When I asked my doctor about it, he explained that the disease affects the shape of red blood cells and you’re born with the anemia, but he didn’t know much more than that. I kept asking people about it. It never left me.”

Advancements have been made in the study and treatment of the disease in the century since it was first identified, but people of many races are still born with it, still die early from it and no cure exists.

Cooper-Smith hopes all of that will change in her lifetime. It’s hard to doubt her when she emphatically proclaims that she’ll raise a million dollars for research before she dies.

Her grass-roots efforts — gaining support from churches, fraternal and civic groups, family and friends, for example — raised enough money to endow in May a professorship in the Virginia Commonwealth University School of Medicine. Thought to be the first of its kind in the country and named in her honor, the milestone professorship supports aggressive research projects designed to discover lifesaving treatments and perhaps a cure.

Recently, a group of her friends organized the Florence Neal Cooper-Smith Sickle Cell Research Committee to increase awareness about the disease and to raise money for research.

Cooper-Smith’s devotion to finding a cure includes years of community-based education and legislative work in Virginia as well as national networking through the National Institutes of Health and the U.S. Department of Health and Human Services. In 1969, she led a Richmond-area survey to gauge awareness of the disease. Only 3 in 10 people had heard of it. Two decades later, she pushed a bill through the Virginia legislature mandating statewide newborn screening for the disease.

“We call Florence the ‘mother of sickle cell in Virginia,’ and it’s definitely a term of endearment,” said Wally R. Smith, M.D., professor and vice chair for research in the VCU Division of General Internal Medicine at the School of Medicine and inaugural holder of the Florence Neal Cooper-Smith Professorship.

Trained as a medical technician, Cooper-Smith began her career at the Medical College of Virginia in burn research alongside E.I. Evans, M.D., in the early 1950s. Later, she met hematology professor Robert B. Scott, M.D., and the two collaborated to create the Virginia Sickle Cell Anemia Awareness Program, now housed at the Virginia Department of Health.

Even with a national reputation for her efforts, Cooper-Smith remains humble and hopeful.

“It overwhelmed me to hear that the professorship was going to carry my name,” she said. “I didn’t do anything other than move something along. I just want to keep the research going. We’ve got to find better treatment, management and care for the 100,000 people affected in the U.S.”

“In a way, we’re continuing Florence’s original community work through one of our current projects,” Smith said. “We find and bring into care patients with sickle cell disease who have not been seeking care. It’s as if we hand these patients a life raft.”

The life raft is hydroxyurea, an underutilized, under-prescribed anti-sickling medication approved for use in the late 1990s.

When explaining why the drug isn’t more widely used, Smith said, “It’s the curse of sickle cell. There are not enough doctors taking care of adults with the disease. Patients don’t trust the medical establishment and they feel rejected.”

It’s an uphill climb, but thanks to the funding the Cooper-Smith Professorship provides, he said, he and his VCU colleagues can continue that climb.

To learn more about the Florence Neal Cooper-Smith Professorship, contact Brian Thomas, interim president of the MCV Foundation, at 804-828-0067 or bsthomas@vcu.edu.