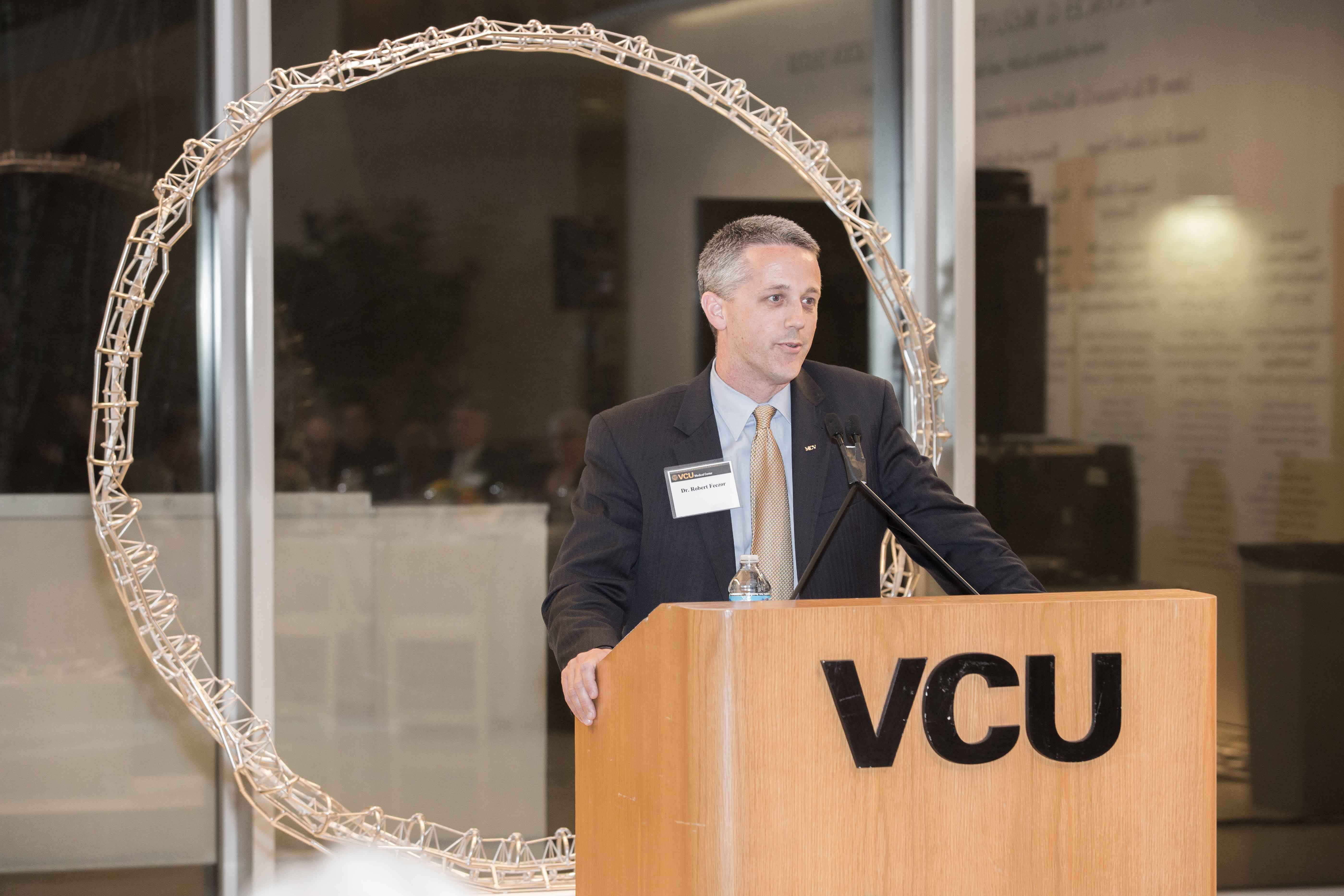 For Robert J. Feezor, M.D. (M.D.’99/M), presenting at the second annual H.M. “Hyung Mo” Lee Memorial Lecture at the Virginia Commonwealth University School of Medicine in March was more than an opportunity to visit campus again.

“I remember when I was contacted about [giving] the lecture,” Feezor says. “It made me take pause. I got way more emotional about it than I usually do.”

Bill Feezor worked as a hospital administrator on the MCV Campus from 1967 to 1976. He’d been told he’d never live a full life or have children, but two of the world’s most talented transplant specialists changed that.

“They gave Dad his life,” Feezor says. “Without Hume and Lee, I wouldn’t be here. I thought it would be neat to be a visiting professor at VCU, but with such a strong emotional connection to my family, the lecture experience was spectacular.”

The associate professor of surgery in the Division of Vascular Surgery and Endovascular Therapy at the University of Florida College of Medicine in Gainesville spoke to a full-house crowd
of surgeons, faculty, friends and donors about vascular techniques
and trends.

Lee, for whom the memorial lecture was named, was known around the world as a pioneer in organ transplantation. He was also known around VCU as a gifted educator, admired mentor and skilled clinician.

Before his death in 2013, he had a long career, not only in Richmond but also in Korea, where he was born and educated and began his practice as a surgeon. After coming to the United States in 1953 to study thoracic surgery, he became part of MCV’s groundbreaking transplant program – one of only four in the country.

He and his mentor, David Hume, M.D., under whom he completed his residency, helped establish an organ-sharing program. That effort grew into what is now the Richmond, Virginia-based United Network for Organ Sharing, a nonprofit organization that manages the nation’s organ transplant system.

Upon Lee’s death, his widow, Kyung Lee, M.D. (H.S.’57/M), a former pediatrician, and the couple’s two children, Margaret Mikyung Lee and Bennett Lee, M.D. (M.D.’94/M), asked for memorial gifts to be made to the MCV Foundation. The resulting outpouring of appreciation now amounts to a fund totaling more than $120,000. It led to the creation of the Lee Memorial Lecture in 2014.

“I was amazed at the donations,” Kyung Lee says. “So many people loved H.M.”

Held in the spring, the lecture focuses on topics alternating between vascular surgery and transplant surgery.

The Lee family says it hopes to honor the rich history of
the MCV Campus and to enhance its legacy of providing leading-edge surgical excellence and innovation. The lecture’s endowed funds enable the School of Medicine’s Department of Surgery to bring in national experts to speak at grand rounds and to spend time with residents and fellows in the
two specialties.

“Dr. Lee was responsible for the education of a generation of surgeons and advancing the field of solid organ transplantation. He was always seeking new opportunities to learn and expand his knowledge in medicine,” says Vigneshwar Kasirajan, M.D., chair of the Department of Surgery and professor and chair, Division of Cardiothoracic Surgery. He is also director of heart and heart-lung transplantation at VCU Pauley Heart Center. “The Lee family has shared his aspirations for high-quality surgical education through this endowed lecture that will benefit all in perpetuity.”

To learn more about the School of Medicine, contact Tom Holland, associate dean for development, at (804) 828-4800 or tehollan@vcu.edu.