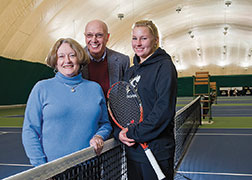 Patrick, Timothy and Terrence O’Toole, along with their sister, Erin O’Toole-Lyon (B.S. ’00, M.S.W. ’05), surprised their parents on Christmas Day 2009 by creating a scholarship in their name.

Parents Deborah O’Toole (B.S. ’74) and Virginia Commonwealth University School of Business professor emeritus Dennis O’Toole, Ph.D., (M.S. ’68) said they knew the children had decided on a group gift but had no idea what it could be.

Christmas morning, Patrick and his wife, Melissa; Timothy and his wife, Caren Benjamin; and Erin and her husband, Andrew Lyon, presented the family gift. Judging the shape of the wrapped gift, Deborah’s guess was a family portrait.

The whole family was present for the opening; even son Terrence and wife Jeannie O’Toole, who live in Tennessee, were on speakerphone when the gift was presented.

Much to their delight, the O’Tooles unveiled a plaque created by the VCU Department of Intercollegiate Athletics that commemorated the endowment of the Dennis and Deborah O’Toole Scholarship.

“It was in fact a portrait — of how much VCU means to our family,” Deborah said. “Dennis and I were in tears. It was an extraordinary gift.”

The O’Toole siblings and their spouses let their parents select which VCU sport would benefit from the scholarship.

Deborah and Dennis selected the tennis team, Deborah said, because of their admiration for coach Paul Kostin and because they knew scholarships are needed for that sport.

The first recipient of the Deborah and Dennis O’Toole Scholarship for the VCU Tennis Program is 21-year-old sophomore Josefin Karin Hjertquist from Stockholm. The scholarship provides Hjertquist with financial support each year until she finishes competing for VCU. She is considering a degree from the School of Business and a career as a sports agent.

“I’m really honored to receive this scholarship,” Hjertquist said. “It means a lot to me, and I feel grateful that the O’Toole family cares about VCU tennis so much.”

VCU sports — especially men’s basketball — are a tradition in the O’Toole family.

“I’ve been going to VCU basketball games since I was 5 years old,” said Erin, now 32. “When we were younger, we would travel to tournaments with our parents to cool destinations like Hawaii and Puerto Rico, and we got to know the team. It was a real positive experience.”

Victor Cegles, director of the Ram Athletic Fund, said the O’Tooles are longtime supporters of VCU and their children chose a great way to create a family legacy.

“With the cost of higher education increasing each year and with state support decreasing, the need to secure our student-athletes’ futures is more important than ever,” Cegles said. “The Dennis and Deborah O’Toole Scholarship will provide stable, long-term financial support to deserving student-athletes.”

The family plans to continue contributing to the scholarship over time, Deborah said.

To make a gift to the VCU Department of Intercollegiate Athletics, contact Victor Cegles, director of the Ram Athletic Fund, at (804) 828-4771 or vpcegles@vcu.edu.