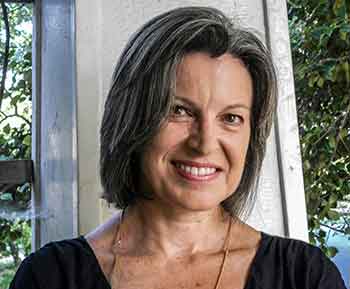 Though Claudia Emerson came late to the world of poetry, she embraced the genre and said in a PBS interview shortly after winning the Pulitzer that she processed the world through poetry.

Almost immediately after her death from colon cancer in December 2014, friends and colleagues at Virginia Common­wealth University, where she was a creative writing professor in the English department of the College of Humanities and Sciences, established the Claudia Emerson Scholarship to celebrate her life and her dedication to her students.

The scholarship assists students by providing access to enrichment opportunities such as conferences and workshops. The scholarship monies also help increase the stipends available for graduate teaching assistants.

Emerson was at VCU for a short time only, arriving in summer 2013. But the impression she made has been etched for a lifetime.

“I worked with Claudia during my second year,” says Christie Maurer, now a third-year graduate student pursuing an M.F.A. in poetry. “We would get coffee, and she’d invite students to her home for workshops. She was amazing.”

Awarded to undergraduate and graduate students in the poetry or creative nonfiction program in the department, the Claudia Emerson Scholarship has already benefited five students as they hone their craft. Maurer is one.

The award will let Maurer attend the Association of Writers and Writing Programs conference this spring in Los Angeles, which, for her, would otherwise have been financially out of reach. The event will put Maurer center stage among the writing profession. She’ll have the opportunity to share her work, meet other poets and be inspired.

“To be acknowledged for my efforts in Claudia’s name is extra special,” Maurer says.

Lauren Miner (M.A.’12/H&S; M.F.A.’15/H&S) found herself amid established and aspiring authors at the 2015 Sewanee Writers’ Conference, thanks to the funds provided by the scholarship.

“Poetry is often produced and consumed in solitude,” Miner says. “Gatherings like Sewanee provide opportunities to experience that work in a more public space. I feel energized by that experience and empowered to continue working with language. It’s hard to measure how important that is.”

It’s equally hard for her to measure the significance of having Emerson in her life.

“Claudia was so deeply invested in her students,” she says. “She would schedule her cancer treatments so that she could still teach. It’s hard to feel deserving of the scholarship because she was such an amazing person. It’s a very big honor.”

TAKING IT TO HEART

Emerson found her way as a poet after spending her early adult life in other roles, from headmistress at Chatham Hall, a small girls’ prep school in Southwest Virginia, to bookstore clerk and rural mail carrier.

Fellow Southern poet Betty Adcock became a mentor. Emerson’s husband, Kent Ippolito, says the support meant a lot to her. When she tried to find a way to express her gratitude, Adcock simply told her to do the same for another writer.

“Claudia took that completely to heart,” Ippolito says. “That’s the way she lived her very last weeks. She was able to finish a blurb for a young woman’s book of poems, and for another poet, she wrote a letter of recommendation for a book prize. That’s how she lived, and that was as much a part of her career as her devotion to her students and to her work.”

Emerson’s love of teaching and student success undoubtedly played a part in the establishment of the scholarship.

“Claudia would have been thrilled with the scholarship,” says Katherine Bassard, Ph.D. (M.A.’86/H&S), senior vice provost for faculty affairs and former English department chair. “The fact that [her students] would be able to study poetry or creative nonfiction [with help from the scholarship funds] would be wonderful to her.

“She would often thank me for the honor of being here; she loved VCU. This scholarship is a chance to establish a legacy in her memory so that her dedication to her students and to her poetry will continue.”

“VCU has a nationally ranked creative writing graduate program, but in terms of being able to offer a living wage to our students, we’ve had to really struggle to get stipends to a level that helps us compete with other universities,” says David Wojahn, a fellow creative writing professor at VCU. He remembers first meeting Emerson 12 years before her arrival at the university.

“I read one of her books and sent her a fan letter, and we corresponded from that time on,” he says. “I can’t think of another creative writer I’ve worked with [who has] such a solid work ethic. She crafted her poetry superbly. She devoted the same amount of time and engagement to her teaching as she did to her writing.

“There are gifted writers who are not gifted teachers, and vice versa. It’s rare to find someone superb in both endeavors.”

To learn more about the College of Humanities and Sciences and the Claudia Emerson Scholarship, contact Bethanie Constant, senior director of development, at (804) 828-4543 or constantb@vcu.edu.