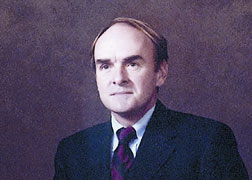 The late Rev. Robert B. Lantz (Cert. ’64) completed his training toward certification in clinical pastoral education from the Program in Patient Counseling at Virginia Commonwealth University’s College of Health Professions, marking the beginning of a long and cherished relationship with the university.

His wife, Katherine Lantz, said he found his VCU residency, completed while earning his certificate, to be the richest educational experience of his life.

“It was the foundation of his professional career,” she said.

In recognition of the education he received, in 2001 the Rev. Lantz pledged $100,000 to establish the Robert B. Lantz Professorship in Patient Counseling. That pledge was fulfilled in 2006. Before his death in July 2008, he included in his estate plan a bequest of nearly $1 million to transform the professorship into an endowed chair. His gift is the largest ever to the College of Health Professions by an individual.

“When it came time to decide how to make out his will, he decided to give back to the institution that meant so much to him,” Mrs. Lantz said.

After graduating, the Rev. Lantz went to work at Lutheran Hospital in Baltimore and then became chaplain at City of Memphis Hospital, where he established the Memphis Institute of Pastoral Care, the hospital’s pastoral and education department, in 1967.

In 1970, the Lantzes moved to Annapolis, Md., where the Rev. Lantz joined the faculty at St. Paul’s Seminary and established a private counseling practice. While at St. Paul’s, he was responsible for launching the Maryland Institute of Pastoral Counseling, an educational program where he taught and counseled.

D. Mark Cooper, D.Min. (Cert. ’75), chair of the patient counseling program at VCU, studied under the Rev. Lantz at City of Memphis Hospital. The Rev. Lantz believed his education at VCU was directly responsible for his success, Cooper recalled.

“The Rev. Lantz felt strongly that he should give back to the Program in Patient Counseling and the College of Health Professions because of what it did for him,” Cooper said.

For the last 20 years of his life, the Rev. Lantz made it a priority to support the development of a master’s degree program in patient counseling at VCU.

In 2003, the Rev. Lantz was named the school’s Alumni Star. He served on the board of trustees of the MCV Foundation in 2006 and spent nearly 15 years as chair of the advisory committee for the Program in Patient Counseling.

Cecil Drain, Ph.D., CRNA, FAAN, dean of the College of Health Professions, said he learned a considerable amount about pastoral care as well as the details related to clinical training for chaplains through the Rev. Lantz’s mentorship. In 1995, the dean served alongside the reverend on the search committee for a new chair of the Program in Patient Counseling.

“He became a valued friend and counselor,” Drain said. “He taught me not only about the profession but the type of education he felt was required to prepare the next generation.”

The Rev. Lantz believed that students deserved to earn more than a certificate for their 18 months of training, so he and Drain agreed to intentionally search for a chair who could develop and implement a new master’s program in patient counseling. That dream was realized in 2001.

The program excelled with the support and guidance of the Rev. Lantz, whom Drain described as genuinely devoted to the program.

“Of all the alumni that I deal with, Bob was among the most influential and supportive,” Drain said. “He was a very good man, a great friend and alumnus, and a joy to be around.”

“Bob’s commitment and dedication was evidenced not only by the distance he traveled to participate in the development of our program but also the personal consultation he offered during my tenure as chair. This generous gift is a reflection
of his strong support for the long-term viability of the program.”

For more information on planned giving in the College of Health Professions, contact Jessica Feinberg Gurganus, senior director of development, at (804) 828-3269 or jfgurganus@vcu.edu.