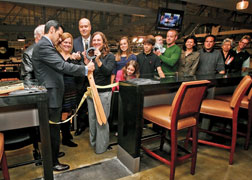 On Nov. 30, before the men’s basketball game with South Florida, Virginia Commonwealth University officials cut the ribbon on the athletics department’s much-anticipated Club Seat and Suite Project at the Stuart C. Siegel Center.

The 15,000-square-foot renovation and expansion has provided the Siegel Center’s second level with a complete facelift. The project included the addition of luxury suites, a 120-club-seat balcony, renovated offices and a sparkling new lounge, the Tommy J. West Club. Completed entirely through private donations of $3.4 million, the initiative has reshaped the way fans, donors, coaches and student-athletes view VCU Athletics now and in the future.

The centerpiece of the project is the Tommy J. West Club, named for the late Tommy West, a longtime VCU fan and supporter. With its distinct brick and hardwood-covered walls and upscale lounge furnishings, the club draws heavily on the urban aesthetic flair of Richmond’s Fan District. Complete with flat-screen TVs and bar-top seating, the club provides fans with an unparalleled game-day atmosphere. The lounge serves as a gateway to the project’s 120 club seats, all with an outstanding panoramic view of the arena.

Invitations to the dedication were extended to all of those who contributed to the project, including the West family. The ceremony included remarks from VCU President Michael Rao, Ph.D., director of athletics Norwood Teague and West’s daughter, Aimee.

“To be quite honest, this thing turned out even more dramatic than even I envisioned,” Teague said. “I knew it was going to look great … it really reflects a Final Four-type basketball program.”