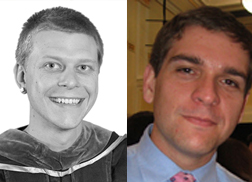 Scholarships in memory of alumnus Paul Heron (Pharm.D. '09) and student Neil Van Pelt, who was a member of the School of Pharmacy's Class of 2012, have been endowed in the school.

The school was saddened to lose both a young alumnus and a student last year. Heron, 26, died March 19, 2010, in a car crash. He had been employed as a pharmacist for a Kroger Pharmacy in Portsmouth, Va. Van Pelt, 24, died in a car crash June 16, 2010. He was a rising third-year Pharm.D. student and had been working as an intern at a Rite Aid Pharmacy in Midlothian, Va.

Heron and Van Pelt's families and friends thought one of the best ways to honor their loved ones was to create a legacy for them through scholarships that will help other students achieve their career dreams.

Fundraising activities for the Paul W. Heron Memorial Scholarship ranged from a benefit golf tournament to a neighborhood lemonade stand set up by Heron's younger brother, James Jennings. Heron's stepfather, Tim Jennings, said the golf tournament will be an annual event to continue celebrating Heron's life and to help perpetuate the endowment.

Rite Aid Pharmacy jump-started the drive for the Neil Van Pelt Memorial Scholarship. The Class of 2012 raised the remainder of the initial endowment fund via donations and activities such as an on-campus brunch and a "Minute to Win It" competition.

"This will be a living memorial to Neil, a gift that keeps on giving to the students and to the school," said Ashley Savage, president of the Class of 2012.

To learn more about scholarships in the School of Pharmacy, contact Ellen Leverich, director of development for the school, at (804) 828-3016 or emleverich@vcu.edu.