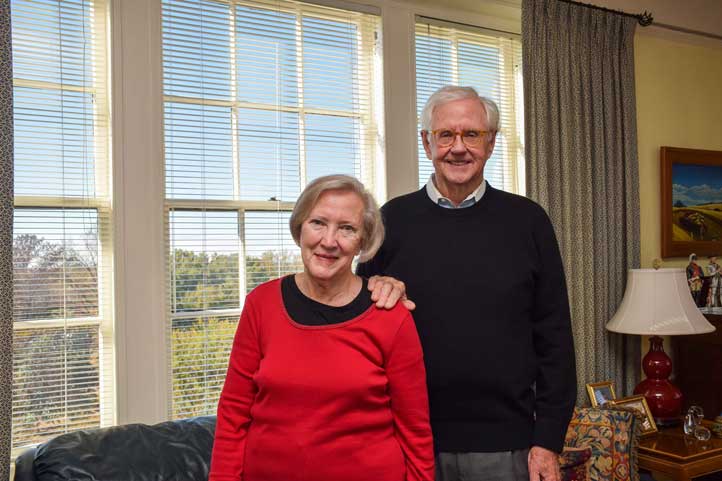 Thirteen years ago, two noted authors made the decision to move to downtown Richmond, Virginia, from the city’s Near West End. Now, immersed in the bustle of campus life at Vir­ginia Commonwealth University, they wouldn’t have it any other way.

“We realized that from that point on, VCU would be, in one way or another, a part of our lives,” John Peters says from the light-filled living room of the home he shares with his wife, Margaret. He is a former commercial litigator, and she is a historian. They live in the historic Prestwould building at 612 W. Franklin St., across the street from Monroe Park.

Many of their contemporaries and friends were moving farther away from town, rather than closer in.

“We were influenced in making the move by the vitality of the university community,” he says. “It was something we thought we would enjoy, and that has turned out to be the case. VCU has altered our neighborhood and enriched our lives in many ways.”

As a display of appreciation, the couple embraces their role as good neighbors. Their gifts over the years to the James Branch Cabell Library and to the Institute for Contemporary Art help preserve and improve the environment for them and the entire Richmond community.

The Peterses, both with expertise in history and architecture, are members of the VCU Friends of the Libraries and often take advantage of borrowing privileges to assist in their writing. They are also fans of cultural events and enjoy walking to nearby art exhibits, lectures and concerts.

“Our perspective is that if VCU is going to be a part of your lives, you should support the things at VCU that are important to you,” John Peters says. Their gift to the new Cabell Library building fund will name a group study room.

As former historian and program manager for the Virginia Department of Historic Resources, Margaret Peters is naturally drawn to the architecture of the VCU neighborhood, including the new ICA, which is expected to open in 2017 and was designed by noted architect Steven Holl.

“The thought of having a world-class-designed building in our neighborhood was really important,” she says. “It wasn’t just the art aspect that appealed to me. I saw the building itself as an important contribution to the city of Richmond in terms of true excellence in architectural design.”

The couple’s support is essential as VCU continues to take shape as one of the nation’s top public urban research universities.

“John and Margaret’s early support for this project has been amazing,” says ICA Director Lisa Freiman. “The ICA is a critical anchor for interdisciplinary, universitywide scholarly research and teaching, as well as a resource for the broader community. We consider them to be true visionaries, and we are grateful to them for that.”

Likewise, through attendance and growing financial support from Friends of the VCU Libraries members like the Peterses, VCU Libraries can offer more book talks, compelling lectures and engaging events than ever before.

“The Peterses have had an enormous impact on VCU and the VCU Libraries,” says University Librarian John E. Ulmschneider. “Their longtime commitment to cultural programming has made all the difference in our work to create open and free opportunities for learning and growth available to the entire Central Virginia community. The new library, with large public spaces and a state-of-the-art auditorium specifically designed for scholarly presenta­tions and programs, is destined to become a community beacon.”