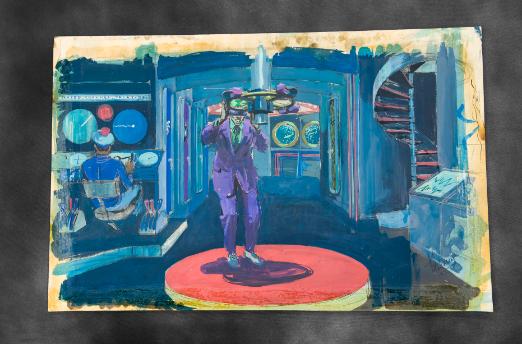 When comic arts collector David Anderson, D.D.S. (D.D.S.’82/D), gave a set of rare collectibles to VCU Libraries in 2005, he had no inkling of the impact his gift would make 10 years later: national exposure for his alma mater in a prestigious New York exhibition.

Three set-design paintings from the “Batman” TV series (1966- 1968) and movie (1966) that Anderson donated to Special Col­lections and Archives were displayed Oct. 9, 2015, through Feb. 21, 2016, as part of “Superheroes in Gotham” at the New-York Historical Society Museum & Library in New York City. The exhibition drew about 150,000 visitors to the venerable Central Park West museum during its run.

The paintings, by artist Leslie Thomas, were featured alongside such comic-book treasures as original drawings by Steve Ditko of Spider-Man’s first appearance in “Amazing Fantasy” (No. 15, 1962), a copy of “Action Comics No. 1” (Superman’s first appearance) and an original Batmobile from the 1966 “Batman” TV series.

Anderson, who lives in Northern Virginia, says his childhood love of comic books grew into an interest in original comic art. Batman and Superman are his favorites. Twenty years ago, he had the opportunity to purchase a large Batman collection that included these set-design paintings. “I kept a few that I particu­larly liked or that brought back fond memories of watching the ‘Batman’ TV show, but the majority of them I thought could best be appreciated by others, so I donated them to VCU,” he says. The three that were shown in New York are among a total of 38 held by VCU Libraries. They are available for use by schol­ars and researchers.

Anderson says he gets a sense of satisfaction from sharing items like these with others. As well as being used for study, he hopes they are appreciated for their intrinsic value as works of art and signs of the popular culture of their time.

Cindy Jackson (M.A.’05/H&S), library specialist for comic arts, says VCU Libraries was honored to have its “Batman” paintings featured as part of the exhibition. “This was an amaz­ing opportunity for VCU Libraries to showcase some of the one-of-a-kind pieces that we have in the Comic Arts Collection to a whole new audience who might not be aware of us,” she says.

Speaking during the exhibition’s run, Nina Nazionale, director of library operations for the New-York Historical Society, said, “We are delighted to be exhibiting Leslie Thomas’ set paintings for the ‘Batman’ television series and the film ‘Batman.’ These captivating images underline how much work, by so many dif­ferent creative people, goes into producing television series and films. They are also vivid reminders of the colors, designs and fashion of the late 1960s.”