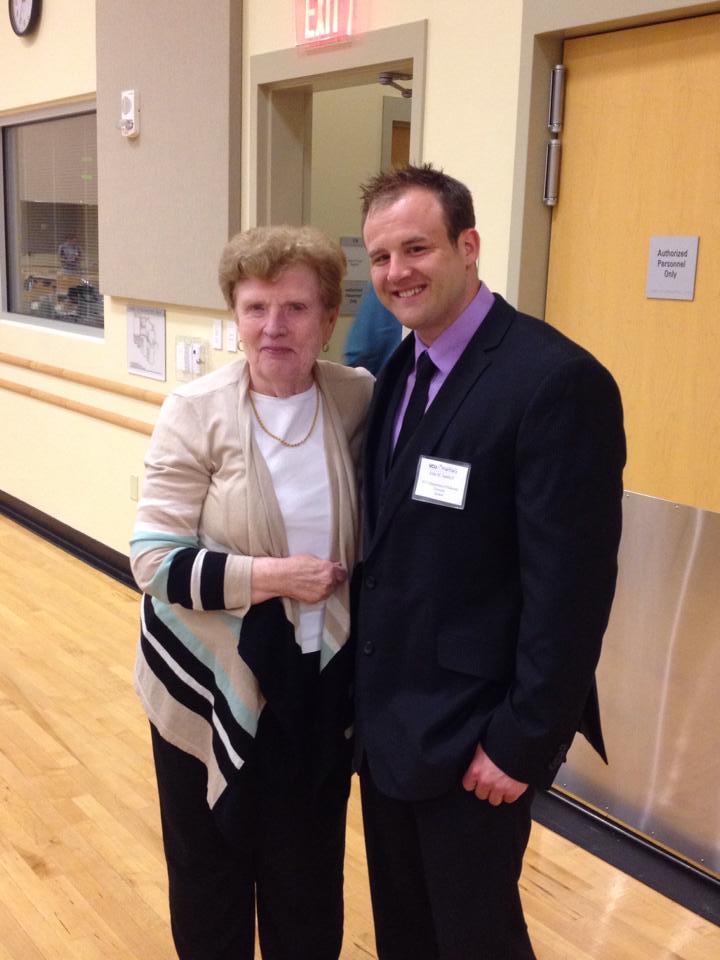 John Saathoff should never have received the Lowenthal Award in 2014.

The Virginia Commonwealth University School of Pharmacy had already chosen Kavita Iyer – like Saathoff, then a second-year Ph.D. student in the Department of Medicinal Chemistry – to receive the award, which was established in 2000 by Hilda Meth, Ed.D. (B.S.’62/H&S; M.S.’67/H&S; M.S.’67/CHP).

Saathoff applied late, but he was permitted an interview. He so impressed Meth, who met with the finalist, that she created a second award that year – though not before putting Saathoff through his paces.

“John had a lot of fire, but he is not a bookworm,” Meth says – an assertion Saathoff, whose research is in Alzheimer’s disease, readily agrees with. The committee set a requirement that he increase his GPA from 3.0 to 3.25.

“I have never been one of those people who sell themselves, I guess,” Saathoff says. “I was a little hesitant to apply for the award; I figured I wouldn’t get it.”

But, buoyed by Meth’s interest in him, Saathoff worked hard and exceeded the GPA goal.

“She wants you to succeed, and she looks out for you,” he says. “It’s a nurturing relationship.”

Meth says she has close relationships with all the previous recip­ients of the Lowenthal Award. “I don’t just give money and walk away.” But she does have an ulterior motive.

Her late husband, Werner Lowenthal, was a professor of pharmacy and pharmaceutics and a director of continuing education during his 31-year tenure at Virginia Commonwealth University from 1961 until his retirement in 1992. Two years after retirement, he died of Creutzfeld-Jakob Disease, one of the so-called “orphan diseases” he’d been so interested in during his career.

Though the disease later gained some notoriety through its asso­ciation with what became known as mad cow disease, at the time of Lowenthal’s death, Meth says she could find only seven articles related to it, and people from all over the world were calling her to find out what she knew.

Meth set up the Werner Lowenthal Fund out of frustration at the lack of available information about CJD. The fund now feeds the Lowenthal Award, a $10,000 stipend normally paid to one phar­maceutical sciences Ph.D. student over two years, and the biennial Lowenthal Symposium. With both focused strictly on supporting research into genetically based neurological diseases, Meth hopes the fund will catalyze the discovery of viable treatments.

“I said [at the time], ‘I want MCV to become the center that attracts bril­liant students from all over the country, so let’s make this scholarship as big as we can. I’d like to attract talent to solve this,’ ” she says.

Meth wants the recipients to spend the stipend as they please, with the idea that by making home life easier, they are freer to work on their research goals.

“A student needs to pay for rent or car insurance, and the price is getting higher and higher,” she says. “The money I got from this award just gave me a big relief. I can focus on my studies.”

Saathoff was more comfortable with his basic finances, so he used the award to buy supplies for his research and to attend national con­ferences – an opportunity he valued for the chance to network with scientists both within his field and beyond.

That was another hope she had for the students, Meth says.

“I want them to go to national and international conferences and pick the brains of the best,” she says. “I hope they do, because we are a global society now.”

But beyond the benefits of the financial assistance, Saathoff found even greater rewards: a mentor who motivated and believed in him, even when he didn’t, and who gave him the confidence recently to apply for another award, a predoctoral fellowship training grant from the National Institutes of Health.

“Dr. Meth’s commitment to the research enterprise and the success of Ph.D. students is a source of pride and energy for the school,” says School of Pharmacy Dean Joseph T. DiPiro, Pharm.D. “She is engaged with faculty and students and always brings a passion for the work and a commitment to excellence. She is an inspiration and a personal cheerleader for each recipient.”

That personal investment continues long after the payouts, as Meth stays in touch with as many of the past Lowenthal Award recipients as possible. Her pride in them is palpable.

“Their goals are to find solutions to improve people’s lives,” she says. “That to me is extremely important.”

Meth hopes that her continued support will mean that, one day, she’ll achieve the goal she seeks.

“I get my goal if we find a solution, a remedy or something. Then there will be no CJD.”