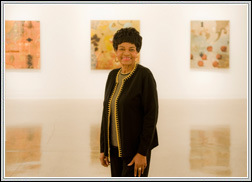 Today, Perry feels strongly about giving back to VCU. She has created a scholarship in the School of the Arts and has included VCU in her will.

The daughter of a poor tobacco farmer, Perry was born and raised in Virgilina, Va., and had to fight her way to the top.

During her tenure at VCU, Perry took unpaid leave to travel across the country, discovering and documenting the work of often overlooked African-American folk artists.

These days she spends her time representing many African-American folk artists, living and dead, through Raven Arts, the art consulting firm she founded and operates.

As she made a name for herself in the world of African-American folk art, Perry also embarked on a successful career in academia. For 25 years, Perry taught art history at VCU. She reflects fondly on her years spent teaching in VCU’s School of the Arts.

In 2000, Perry established the Regenia A. Perry Merit Scholarship.

“I feel benevolently toward scholarships because every year of my education — undergraduate and graduate — was financed by scholarships and fellowships. … It would be remiss if I didn’t reach back and try to help someone else the way I was assisted,” Perry said.

In addition, Perry has included the university in her will. Upon her death, her bequest will establish a scholarship in the Department of Art History.

VCU was her only choice as a bequest beneficiary, Perry said, explaining, “That’s where I spent the majority of my career — I wouldn’t think of another place.”

Planned gifts are vital to maintaining a high-caliber educational experience while creating a lasting legacy for the donor, said School of the Arts Dean Richard Toscan.

“We are deeply grateful to our alumni, faculty and friends who make provisions for VCU Arts through their estates. Generous bequests like Dr. Perry’s allow our students even greater opportunities,” he said.

Scholarships are a key tool in the university’s admissions portfolio for attracting and retaining the best and brightest students from throughout the country, said Thomas C. Burke, executive director of the VCU Foundation.

“Our top-rated programs, such as those in the School of the Arts, lure exceptional scholars and artists from throughout Virginia and beyond, including many who could attend any college or university of their choice,” he said. “Bequests are a great way to ensure future excellence at VCU.”

To make a gift to the School of the Arts, contact Jayne Dolton Shaw, associate dean for development, at (804) 827-4676 or jdshaw@vcu.edu.