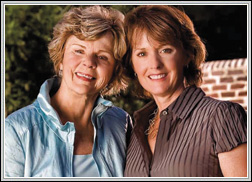 In November, members of the Richmond, Va.-based Charles S. Luck III family made a commitment to endow a $1.5 million chair in cancer research at the Virginia Commonwealth University Massey Cancer Center.

True Luck and daughter Terrell Harrigan battled different types of cancer in the past few years and sought treatment at Massey, Richmond’s only National Cancer Institute-designated cancer center. Through their experiences, they met other patients and learned more about Massey’s research mission. Harrigan enrolled in two clinical trials. She also joined Massey’s Advisory Board in July 2008.

“While fighting cancer, we realized that we were standing on the shoulders of countless people before us who invested in cures at Massey, whether they participated in clinical trials or funded cancer research that led to improved treatments that we received,” Harrigan said.

The Harrigan, Haw and Luck Families Chair in Cancer Research will allow Massey to recruit a highly accomplished researcher from the top of his or her field. Such highly sought recruits usually bring significant research dollars and well-trained teams with them.

“We are honored by this generous gift that enables us to recruit and retain more world-class researchers and ensure the resources needed to make breakthrough discoveries,” said Dr. Gordon Ginder, director of Massey Cancer Center.