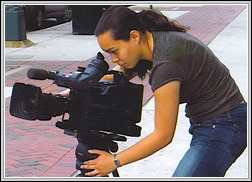 As a senior broadcasting major in the  Virginia Commonwealth University School of Mass Communications, Lisa Figueroa got a glimpse last summer of what her future might look like: She spent two weeks as an intern at Warner Bros. Entertainment Inc., a leading production company.

In April 2006, Figueroa was on campus when her mother called from home to tell her that she had received a letter accepting her for the two-week program.

“I was so happy, I cried,” Figueroa said.

During August 2006, Figueroa traveled to Warner Brothers Domestic Headquarters in Los Angeles with Jennifer Palacios, a senior Adcenter student who was the other recipient of the internship from VCU.

The annual Warner Brothers internship is a two-week program that gives students the chance to see firsthand what working in a television production studio is like. During the program, the interns tour and learn about various departments in the company, such as Casting, Marketing, Media Research, Consumer Products, Sales/Distribution and Business and Legal Affairs.

“Visiting all the departments was great because I got to learn about different aspects of television, rather than focusing on one thing,” Figueroa said.

Casting became one of her favorite departments because she was able to visit with the office that selected the cast of the hit show “Friends.”

Sitting in on meetings provided another way for the interns to get an inside look at the entertainment business. Figueroa attended public relations and marketing meetings for several popular shows, including the “Tyra Banks Show” and “Extra.”

The interns also met with VCU alumnus Richard T. “Dick” Robertson, former president of Warner Brothers Domestic Television and founder of the scholarship. They were invited to his home twice, once for a get-to-know-one-another session with the other interns and again for a farewell dinner, Figueroa said.

“Mr. Robertson is a great guy,” Figueroa said. “While at his house he talked with us about our backgrounds, our career goals and the future of the industry.”

Robertson, who is a member of the VCU Board of Visitors and serves as chair of the School of Mass Communications Advisory Board, also funds VCU TV/HD, a program inspired by a similar program at the University of Southern California near his home. The new student-run television initiative produces 30-minute documentary-style shows that air on WCVW Channel 57. Figueroa was one of the first student producers hired for the program by Daniel Brazda, executive producer and manager of VCU TV/HD, in April 2006, shortly after Robertson introduced it in December 2005.

“When I met Lisa at a field production, I knew she had the whole [production] package. She had the right mix of organization and creativity that you just don’t find every day,” Brazda said.

Since working at TV/HD, Figueroa has completed a four-part program on Theatre VCU’s “Medea,” a behind-the-scenes look at the remake of the classic Greek tragedy. More recently, she has worked on a two-part series on the making of the VCU fashion show, Strut.

“[The program] is a great opportunity for me,” Figueroa said. “As a producer, I basically have my own show that I have to produce most episodes for.”

Despite Figueroa’s extensive work with TV/HD, she also makes time for other activities on campus. She is actively involved within the School of Mass Communications, where she has served as president of the Radio-Television News Directors Association for the past three years. Figueroa also is a member of the school’s Student Advisory Board. These roles allow her to work with broadcast journalism professionals as well as students, rounding out her college experience, she said.

After graduation, she hopes to continue her career in broadcast journalism and possibly work for Warner Brothers.

“Part of me would love to go to work for the Warner Brothers studio in [Los Angeles] and the other part wants to stay here in Virginia and work,” she said.