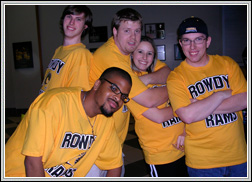 Jeff Hernandez is a proud member of the Virginia Commonwealth University men’s track team but acknowledges that his sport doesn’t draw a lot of attention or support.

“We’re a part of VCU Athletics and represent the school, but we don’t have an arena or the revenue,” said Hernandez, a junior majoring in business administration.

But that doesn’t squelch his enthusiasm; he just works harder to get the word out about the need to support student-athletes.

Recently, Hernandez and teammates Grant Matthews and Chris Derose helped the VCU Department of Intercollegiate Athletics kick off a new student-based fundraising initiative with a pizza night at the Stuart C. Siegel Center.

Created by VCU Athletics, the new Student Ram Athletic Fund allows current students to support their favorite VCU athletic teams by making a $25 donation. The money raised by the student fund will be used to support all athletic programs, to purchase equipment and to fund travel and recruiting.

With their donation, students become members of the Student Ram Athletic Fund, which gives them early entry to men’s home basketball games and discounts at local restaurants and vendors. More than 80 of the 250 students who attended the October event made a gift on the spot. Students could donate using RamBucks, which is a prepaid, stored-value account that is part of students’ ID card.

Liane Barcelona, a junior majoring in biology, joined the Student Ram Athletic Fund at the Siegel Center pizza night and is eager to reap the benefits of her gift.

“I always liked going to basketball games, and there’s always a lot of people there — I’d love to get in early,” she said.

Other students were driven to join for different reasons. Dustin Dubois, a first-year student in the VCU SportsCenter graduate program, signed up because “I thought it’d be a good way to help out the school a bit. It’s a good way to give back.”

Justin Jannuzzi (M.S. ’07), assistant director of ticketing and donor relations for athletics, hopes that the student fund will introduce students to giving and that their membership will be the beginning of strong relationships between VCU Athletics and these future alumni.

In that spirit of building relationships, Jannuzzi has teamed up with the Rowdy Rams, a VCU spirit club. Three of the group’s members, Kevin Woods, Mark Turner and Patrick Wood, also serve on the Student Ram Athletic Fund Advisory Board.

In many ways, the Student Ram Athletic Fund initiative, Woods said, is fulfilling one of the goals of the Rowdy Rams — to allow students to support their sports teams directly.

“We have a lot of student spirit and that’s what they wanted,” he added.

Count Hernandez among those student-athletes who are grateful for the support of the VCU student body.

“Not all sports generate money. This helps out the sports that don’t make as much money,” Hernandez said.

For more information about the Student Ram Athletic Fund, contact Justin Jannuzzi, assistant director for ticketing and donor relations, at (804) 828-2452 or jannuzzijp@vcu.edu.