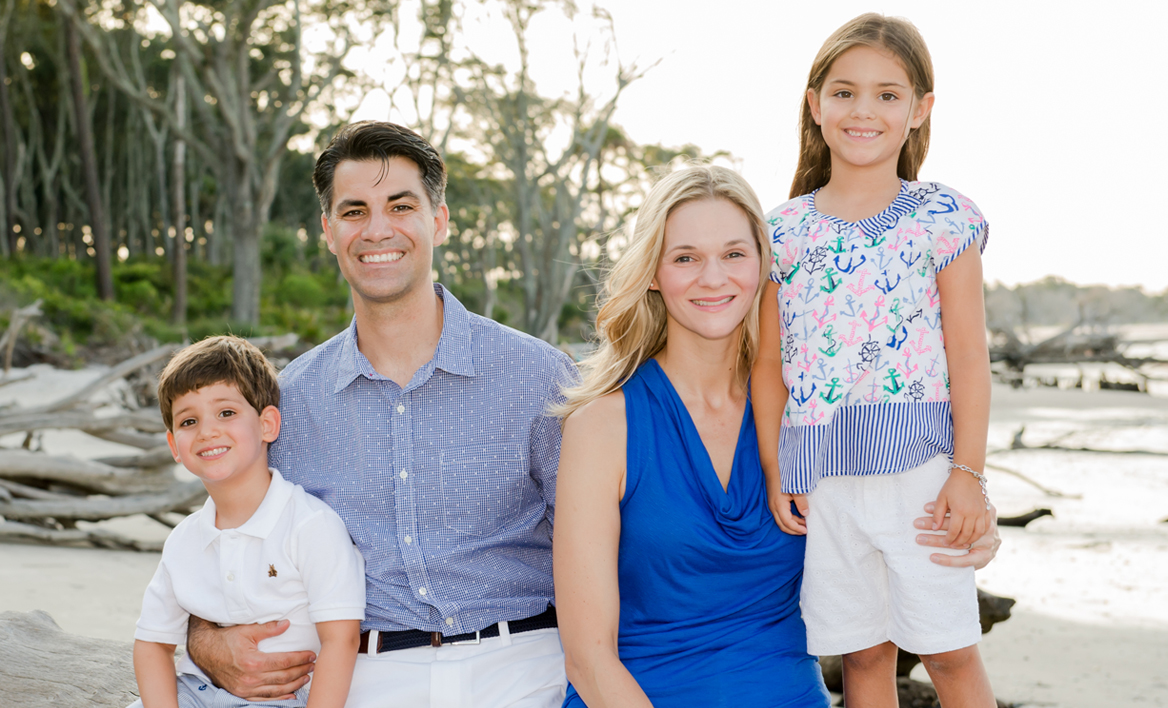 “I just think that VCU does a stellar job in preparing physicians for real-life patient care,” she says.

She is particularly proud of how the medical school bridges the gap between high-end research and comprehensive patient care.

“VCU does a great job of being aspirational and putting out incredible research and really encouraging the students to be excellent – not just great but excellent. But at the same time, it is out there serving everyone – there’s nobody who shows up at the door who doesn’t get cared for. That is a unique position to be in these days.”

Virginia native Scuderi, 38, works in breast imaging and radiology at the Veterans Affairs Outpatient Clinic in Jacksonville, Florida. She and her husband, Chris – the medical director of University of Florida Health Family Medicine and Pediatrics, New Berlin – finished building their dream home in late 2015, and the couple are looking forward to the future with their daughter and son. It’s a situation that, she fully acknowledges, not all her fellow physicians enjoy.

“I look at so many of my colleagues, and they’re heavily, heavily in debt, and it’s going to take a huge portion of their life just to get out of debt,” she says. “And to move forward amid that is very challenging, especially when you start having children.”

Scuderi credits her family’s standing to the scholarship she received at VCU. In addition to a Navy scholarship that would determine the course of her early career, Scuderi received an undergraduate presidential scholarship upon admission to VCU that enabled her to graduate debt-free from the Department of Biology in the College of Humanities and Sciences.

Then, while at the School of Medicine, she received the Sidney B. Barham Scholarship and the Robert C. Bryan Prize in Pathology. She says they were “extremely helpful in easing the burden while you’re in the midst of studying and giving so much of your life to the med school.”

Last year, Scuderi’s “profound sense of gratitude” led her to make a $10,000 pledge with her husband to the School of Medicine’s 1838 Fund. The fund is part of the 1838 Campaign, which is building a scholarship endowment that will help recruit talented students, reward excellence and reduce medical student debt. The 1838 Fund pools gifts from multiple donors to make a bigger impact.

The fund has now grown large enough to award its inaugural 1838 Scholarship to Jessica Fugate Mace. The second-year student from Maryland, who has received the scholarship for two years, had a long path to medical school.

Mace’s undergraduate degree, from the University of Maryland, was in biology. After graduating, she worked in an emergency room with the aim of becoming a physician’s assistant, but she quickly realized that she actually wanted to be a physician. She completed a postgraduate program at Drexel University in Philadelphia and then was accepted by the VCU School of Medicine.

Mace pursued her undergraduate degree in-state. She says that her parents were prepared to pay her tuition for that, but her medical degree was another matter.

“Medical school, especially being an out-of-state resident, is very expensive,” Mace says. “Even though I try not to focus on the money and how much debt I’m accruing, it’s still there. So I am very grateful for the scholarship; it really makes a difference.”

The scholarship helps take some of the pressure off while Mace decides which area of medicine she wants to specialize in. She is leaning toward primary care, arguably the lowest-compensated area of medicine.

“I’m trying to keep an open mind right before I’m about to start all my clinical rotations,” she says. “The scholarship helps me relax and not worry so much while I try to find out what’s the best fit for me long term.”

Michelle Whitehurst-Cook (M.D.’79/M), associate dean for admissions in the School of Medicine, says concern over finances can be a major obstacle to students choosing the specialty that’s right for them.

“The challenge for our students is, ‘Do I choose a career that I really want, or do I choose a career that’s going to help me pay off these debts?’ ” says Whitehurst-Cook, who is also a family medicine physician. “So we worry about people who want to do primary care yet choose another field because they don’t think they can afford to do that.”

“We never want to get to a place where going to medical school only happens for the elite,” she says. “These scholarships based on need help us to give everyone the opportunity to become a physician who wants to be and has the ability to do it.”

This goal spurred the Scuderis’ contribution to the 1838 Fund.

“I hope that it helps VCU to attract competitive candidates that come from every single background,” Gaelyn Scuderi says. “I would love to see people who are bright and smart and the future of our country and our world continue to come to VCU even if they may not have the means to get there or to support their own education.”

The gratitude that led Scuderi to share some of her good fortune with the holder of the 1838 Scholarship looks likely to be paid forward again, when Mace graduates.

“VCU, as a school and as a program, is more than I could have ever expected or wanted,” Mace says. “I imagine myself growing older and giving the same chance to other people.”

To learn more about the 1838 Campaign in the School of Medicine, contact Tom Holland, associate dean of development, at (804) 828-4800 or tehollan@vcu.edu.