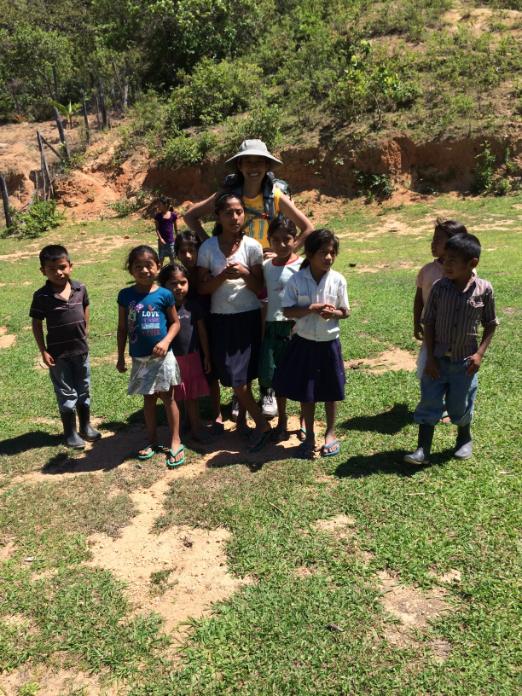 For two weeks last summer, medical student Melissa Huynh took the trip of a lifetime to Honduras, to provide medical services and health care education to the underserved.

Huynh traveled with other Virginia Commonwealth University students and faculty from the schools of Medicine and Pharmacy as part of the Humanitarian Outreach Medical Brigada Relief Effort program. A student-led medical mission trip for those about to enter their second year of studies, HOMBRE started in 2000 and has grown over the years to encompass four sites in Honduras, Peru and the Dominican Republic.

“It’s probably one of the best trips I’ve made in my life,” Huynh says. She estimates the group saw about 300 kids, screening them for anemia and providing basic well-child exams as well as visiting other patients in their communities – some of whom hadn’t had care for years.

Huynh worked alongside physicians, examining patients, looking at their histories and developing treatment plans. But the clinical experience wasn’t all she came away with.

“It revitalized my passion for medicine,” she says. “You kind of lose sight of that in medical school, being buried in your books. There’s something very beautiful in giving care to those who really need it. It’s hard to describe in words.”

Like almost all of her medical school peers, Huynh is challenged by the significant debt load her career choice has left her with.

Some of Huynh’s burden was alleviated by the Ralph Rosen­thal Scholarship. Although the funds she receives from the scholarship didn’t directly contribute to her HOMBRE trip, she says that without the resulting lighter reliance on loans and her usual very careful budgeting, she couldn’t have participated.

Huynh came to VCU after earning her bachelor’s degree from the University of California, Davis. The daughter of two Vietnamese immigrants, she had worked throughout college but still had amassed about $15,000 in debt by graduation.

Coming to VCU, she hoped for a scholarship, she says.

“Every single school interview I went to, I asked about whether scholarships were available and how likely it was that out-of-state students would receive such scholarships,” Huynh says.

The Ralph Rosenthal Scholarship has provided Huynh $10,000 a year for the past two years and is renewable for two more years, as long as she maintains satisfactory progress toward a medical degree and remains among the top students in the class. “It’s provided a lot of relief for me,” she says.

Benefactor Peskin says it’s important to her that the recipient has a real need – “I prefer to be helpful in that way.”

Peskin and her family have been involved with the School of Medicine for years, and several Rosenthals have graduated from the medical and pharmacy schools.

Her motivation, she says simply, is “just that they would not have to worry as much about making it through medical school.”

The scholarship has been lessening worries for School of Medicine students since it was established in 1991. Denver neuroradiologist Eric Lyders, M.D. (M.D.’03/M), received the scholarship four times, starting in 1999, when it awarded $5,000 a year and covered about a third of Lyders’ annual tuition.

Lyders remembers that winning the scholarship was an important factor in his decision to come to VCU, and Whitehurst-Cook says this is the case for many students.

“Scholarships are a great recruitment tool because many of our students get into more than one school, so they have to make a choice,” Whitehurst-Cook says. “Money may be the deciding factor for them.”

While about 80 percent of students in each medical class have a need for financial assistance, she says, only 51 percent currently receive any scholarship money.

“We never want to get to a place where going to medical school only happens for the elite,” Whitehurst-Cook continues. “So these scholarships based on need help us to give everyone the opportunity to become a physician who wants to be and who has the ability to do it.”

To learn more about the 1838 Campaign, contact Tom Holland, associate dean of development for the School of Medicine, at (804) 828-3800 or tehollan@vcu.edu.