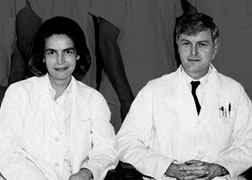 As one of the first female residents in obstetrics and gynecology at the Virginia Commonwealth University School of Medicine and the first female OB-GYN to go into practice in Richmond, Va., Dr. Erika M. Blanton (H.S. ’71) is known as a pioneer in women’s health. Her presence in the OB-GYN department blazed trails for future female students at a time when husbands weren’t allowed in their wives’ delivery rooms and schoolteachers stopped teaching as soon as their pregnancies began to show.

“It was definitely a man’s world,” Blanton said. “I never thought I would be a pioneer for women entering the field at the time. Not that many people wanted to go into obstetrics and gynecology because it was very demanding, but it’s become more attractive, and now there are more women in the field than men.”

Dr. Leo J. Dunn (M.S.H.A. ’98), professor and chair emeritus of the Department of Obstetrics and Gynecology, attributes the school’s increase in the number of female OB-GYN specialists to Blanton. As her professor, Dunn became her mentor and longtime supporter.

“I’m sure many people told her not to apply, but she proved to be up to the challenge,” he said. “She gathered the admiration of her fellow residents, and they looked up to her for leadership. She was a role model who went through residency with flying colors and became one of the most successful practitioners in Richmond.”

In the 1970s, Blanton’s holistic approach to women’s health was something new and different in the Richmond area. She introduced Lamaze education and created classes to teach women about their bodies.

“There were no prenatal education books available,” Blanton said. “I encouraged hospitals to put teachers together with nurses to teach classes about what happens during pregnancy and labor. I wanted to empower women to learn and to feel good about themselves.”

In 2008, in honor of Blanton’s contributions to the School of Medicine and the field of women’s health care, Dunn and his wife, Betty, made a gift to the school to establish a fund in her name and hoped to inspire others to follow their example. In turn, Blanton and several of her patients have contributed to the fund, which supports the ongoing campaign for the school’s new medical education center.

The $158 million James W. and Frances G. McGlothlin Medical Education Center will enable the school to address the state and national physician shortage by accommodating a larger class size, from 200 to 250, which increases the total medical student body to 1,000. Scheduled for completion in 2013, the 200,000-square-foot center will bring together faculty, students, residents and practicing physicians in a state-of-the-art training hub.

“Everyone in the Richmond medical community is excited about the new medical education center,” Blanton said. “It’s important that we grow and attract top-notch scientists and students.”

A partner at OB-GYN Specialists of Richmond, Blanton is an emerita trustee of the MCV Foundation board. Her experience at the School of Medicine helped shape her career and she’s thrilled to be giving back to the place that helped her so much, while shaping the educational experience of tomorrow’s medical students and residents.

“These were very special years. Dr. Dunn was a wonderful mentor throughout my training who understood the need for opportunities for women and who encouraged me to look forward in the field. I had the right teacher. I can only do what I do because I had wonderful training at MCV. It was a privilege.”

To learn more about the School of Medicine’s new medical education center, contact Tom Holland, associate dean for development, at (804) 828-4800 or teholland@vcu.edu.