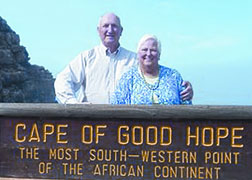 During the luncheon, Strauss shared his vision for the new School of Medicine building. Then alumni asked questions and reminisced about their days in medical school.

“When I walked away from that meeting, I decided I should make a donation to the project,” Whisnant said. “I first talked to my wife, and we agreed to do it.”

The building will provide classrooms and laboratories commensurate with the nation’s top medical schools. Additional instructional space will allow the school to increase its enrollment from 730 students to 1,000. Occupancy is set for spring 2013.

The $158.6 million project is a public-private partnership. Then-Gov. Timothy M. Kaine and the General Assembly approved $70 million for the project, with VCU and private funds supporting the remaining cost. The building will help address a national and statewide physician shortage.

“Capital investments in medical schools will help meet the future needs for health care professionals in the commonwealth, particularly in underserved and rural areas,” Kaine said. “Construction of these facilities will create jobs immediately and position our colleges and universities to continue our highly regarded work force development efforts.”

“I very much enjoyed the four years at MCV,” Whisnant said. “And I realize when I went to medical school the state supported a large part of my tuition, which is obviously not the case for today’s students.”

Whisnant knows firsthand the struggles medical students face. He married at the end of his first year of medical school, and the couple welcomed their first child during his third year.

Their next two children were born, respectively, during Whisnant’s internship at Harper University Hospital in Detroit and his residency at the Mayo Clinic. A fourth child was born after he began his practice, Lynchburg Eye Physicians & Surgeons of Lynchburg, Va.

“Alumni should give to maintain excellence of the school so future students will enjoy an education that we enjoyed,” Whisnant said. “I worked my way through college, and it was hard. I received a benefit and want to pass that benefit on to people who may be in the same circumstances.”

Whisnant retired and sold his ophthalmology practice in 2007. He now spends his time traveling abroad with his wife, enjoying African safaris and camping all over the U.S.

His granddaughter Ashley is following in his footsteps and will be entering medical school this fall.

Tom Holland, associate dean for development at the School of Medicine, said,

“I have come to know Dr. Whisnant over the years because of his involvement with the school. He’s been such a loyal alumnus and every time VCU has held an event, he has always been at the door.”

But Holland stresses the need for other alumni to join Whisnant in supporting this vital effort to raise $37 million in private support for the new building.

“The success of this campaign rests with the alumni who, we hope, will become engaged in making generous gifts,” Holland said. “In the past, we’ve been much more reliant on state resources, but those are becoming scarcer in Virginia, just as they are in other states.”

To make a gift to the School of Medicine, contact Tom Holland, associate dean for development, at (804) 828-4800 or teholland@vcu.edu.