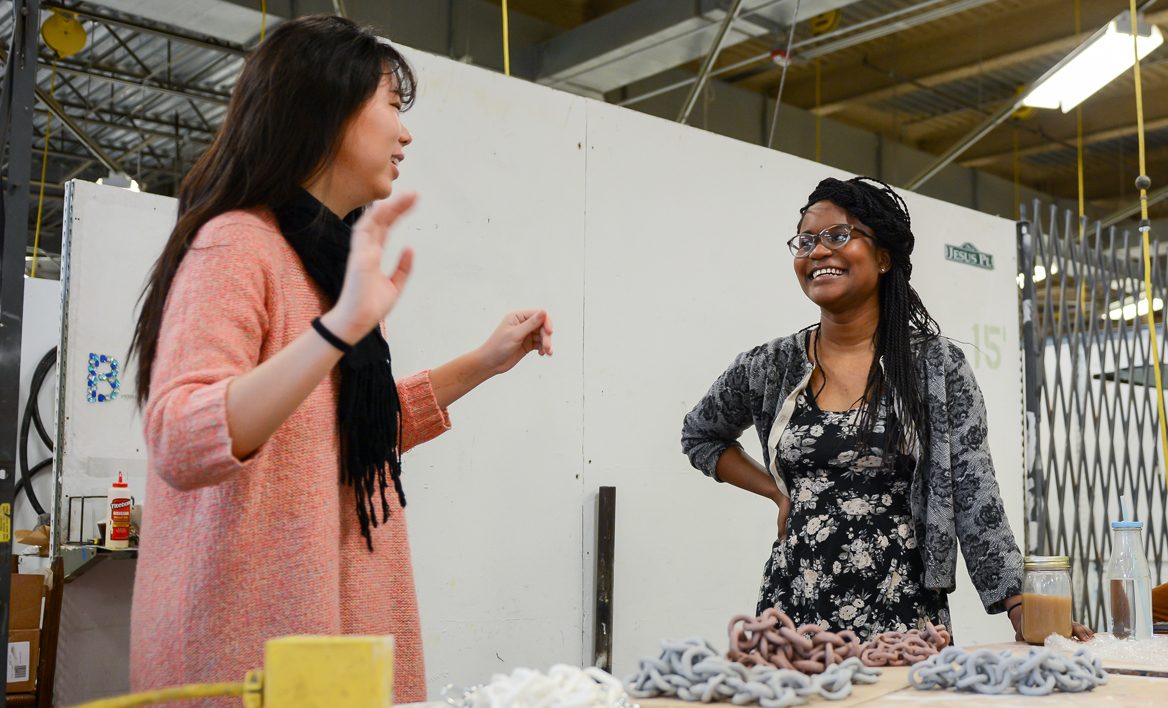 Ask any artist what it takes to launch a successful professional career, and most will mention passion, talent, commitment and vision – but that’s only part of the story.

A recent survey by the Strategic National Arts Alumni Project found that publicity, networking, studio space and exhibition space are just as important to new graduates starting out.

The Fountainhead Fellowship in the Virginia Commonwealth University School of the Arts provides those resources for a select few young artists annually, enabling them to spend their first postgraduate year sharing their talents in the already thriving Richmond, Virginia, arts community and preparing for successful careers.

A competitive pool of applicants from the nation’s top graduate art programs vie for the fellowships in the departments of Sculpture and Extended Media, Painting and Printmaking and Craft/Material Studies. The three fellows gain valuable teaching experience as part-time instructors in their department while also tending to their studio practice and honing their craft.

The fellowship was established in 2005 by Fountainhead Development. Tom Papa and Rick Gregory, the co-founders of the urban development company and art enthusiasts, recognized an opportunity to draw new talent to the local art scene. The company’s sponsorship makes it possible for young artists to relocate to Richmond by providing them with a rent-free furnished apartment and a 400-square-foot onsite studio.

“It can be tough starting out as an artist, so it’s important to us that this program provides the fellows with the support they need to dedicate themselves to their work,” Gregory says.

In February, we visited Ilana Harris-Babou, this academic year’s Sculpture and Extended Media fellow, to see the artist in action and to discuss her experience as a Fountainhead Fellow.

Harris-Babou’s day begins and ends on the south side of the James River, where she and the two other Fountainhead Fellows, Jina Seo and Teto Elsiddique, each live in their own apartments at New Manchester Flats.

“The sense of community we’ve had living near each other has been comforting,” Harris-Babou says. “It was great to explore the city with other people who were new to the area.”

Although she loves having the other fellows nearby, Harris- Babou is grateful to have her own space.

“My artwork is so messy that I like to keep my living space pretty neat,” she says. “It’s nice to keep my apartment the way I like it without having to consider a roommate’s preferences or habits.”

Harris-Babou says that without the accommodations the fellowship provides, a move to Virginia from her hometown of Brooklyn, New York, would have been impossible. Now that she doesn’t have to worry about rent, she can forgo taking a job and focus instead on preparing lesson plans, applying for future

fellowships and residencies and making plans for upcoming showing opportunities.

“It’s been such a gift to have the time and space to focus on my work,” she says. “Not having to worry about how to keep a roof over my head has allowed me to be more ambitious in my art.”

After spending the morning gathering her daily necessities, Harris-Babou fills a travel mug with coffee and leaves to spend the day on campus.

She draws inspiration for her lessons from her undergraduate and graduate educations at Yale and Columbia universities. VCU’s Fountainhead Fellowship attracts artists from the country’s best art programs, bringing new creative perspectives to Richmond and students in the VCU School of the Arts – one of the primary goals of the program, for which VCU graduates are ineligible.

“The fellows serve as intellectual resources and bring fresh viewpoints that may otherwise be difficult to provide to our students,” says Matt King, chair and associate professor in the Department of Sculpture and Extended Media.

Harris-Babou’s morning class is Basic Sculpture, an introductory course for undergraduate students. Together, she and her graduate teaching assistant catch up with each student and offer feedback on current projects. Some students use the time to hash out conceptual elements of their work, while others seek advice on the technical aspects of working with clay.

Anthony D’Angelo, a second-year sculpture student, says that Harris-Babou’s dedication to connecting with each student one-on- one stood out to him.

“Conversations I had with her were instrumental to developing my ideas and making conceptual progress,” says D’Angelo, who has continued working on ideas that were born from those conversations since completing Harris-Babou’s class last fall. “It felt so personal and had a lasting impact on my practice.”

With her Basic Sculpture students, Harris-Babou covers traditional techniques while also encouraging them to experiment with new ideas. In her evening class, Intermediate and Advanced Sculpture, the approach is similar, but she supplements the handson, creative work by introducing advanced topics and readings on art theory.

“The opportunity to teach is one of the most valuable things the fellowship has given me,” she says, adding that, initially, that part of the experience was the most unnerving. “I had always hoped to teach one day, but I still felt nervous going into it. I thought, ‘Do I know anything? Is there anything useful I can say?’”

Teaching at VCU has given Harris-Babou the confidence to pursue this goal in the future.

“The students here are so self-motivated that they make teaching feel natural,” she says.

After a day of teaching, Harris-Babou returns to New Manchester Flats to have dinner at home before taking a short walk across the property to work in her private studio.

“Having my own studio so close by has been great for my productivity,” she says. “It leaves no room for excuses or laziness. I have 24-hour access, so if I have an idea at 2 a.m., I can come right into the studio to work on it.”

Harris-Babou rolls and pats a chunk of clay. Her workstation is scattered with oddly shaped tools, which she made as part of a recent project inspired by home-improvement reality shows.

The pieces she is working on now will be shown in the Fountainhead Fellows’ end-of-year exhibition at Reynolds Gallery in Richmond. The annual, six-week show enables the fellows to display their latest work and gives Julia Monroe (M.A.’14/A) and Alice Livingston, directors of the gallery, the opportunity to expose local patrons to something out of the ordinary.

“A lot of them are doing innovative, installation-based artwork,” Monroe says. “It’s very different from what we usually exhibit, so it gives us a chance to showcase challenging, thought-provoking artwork.”

Harris-Babou’s unique approach to sculpture incorporates performance art and video to shine a spotlight on the creative process rather than the finished product.

“The end result is really just an artifact of the process,” she says. “I’m more interested in the point where the piece is in the state of becoming. I figured that if that is the part that interests me, then I should show it.”

The Reynolds Gallery exhibition is just one of several shows for Harris-Babou this year. In January, her work was featured in shows at the SculptureCenter, a contemporary art museum in Long Island City, New York, and at the Zuckerman Museum of Art in Kennesaw, Georgia.

“She’s on fire, and I can tell she is not slowing down anytime soon,” says King, who has worked closely with Harris-Babou throughout her time as a fellow in the department. “Programs like this give young artists like Ilana, whose career is just beginning, the space, time and experience to come into their own in their practice.”

This spring, her Fountainhead Fellowship will come to an end, and Harris-Babou will return to New York, where she will serve as a Van Lier Artist-in-Residence at the Museum of Arts and Design in New York City. Then, in the fall, she will begin teaching video as a visiting artist at Williams College in Williamstown, Massachusetts.

She plans to continue showing and creating and hopes to have more chances to teach in the future. “I’ve grown a lot in my practice,” she says of her time as a Fountainhead Fellow. “I’m confident sharing my work with other artists and the public, and after this experience, I’m confident in my ability to build a career as a professional artist.”