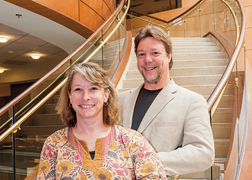 As a teenager thinking about college, Peter Aiken, Ph.D. (B.S. '81; M.S. '84), never thought about applying to Virginia Commonwealth University. Thankfully, his mother knew best and applied for him.

"I was meant to be at VCU, and my mother knew that," Aiken said. "I had always envisioned myself in this type of urban format but didn't realize it."

Aiken, who today is an associate professor in the VCU School of Business, and his wife, Cathy Denton (B.A. '97; Cert. '02), have an affinity for the university.

One of the things the two have in common, Denton said, is that VCU helped them find themselves.

"We greatly value VCU. It's not a cloistered college with little outside exposure and interaction. It's part of the overall Richmond community and creates good, solid businesspeople, and that means a lot to us," she said. "It helped us figure out what we wanted to be when we grew up."

Both feel strongly about giving back, and in December 2012, the couple named the School of Business Foundation as the beneficiary on a $500,000 life insurance policy to establish the Susan Thomas Benck Aiken Professorship in Data Management, in honor of Peter's mother.

The idea came about after Aiken's parents named him as executor of their estate.

"As we were talking about estate planning, I was reminded that at 18 years old, I had applied to a couple of colleges and been accepted. But my mother knew me well and applied to VCU in my name. It was a much better choice for me," he said. "And I'm thankful for that. If she hadn't done that, I would have been on another track. This is a way to say, 'It's 35 years late, Mom, but it was really great of you to put in the application for me.' We very much wanted to say thanks."

"It really wasn't hard to do," Denton said. "It's easy to spend more than that every month on simple purchases like gourmet coffee!"

Aiken also gave $10,000 for a naming opportunity when Snead Hall, home to the School of Business, opened.

"Essentially, I purchased my office," he joked.

"We cannot thank Peter and Cathy enough for their generosity and support. Their gift will create a long-term legacy for the VCU School of Business," he said. "Their generosity allows the school to establish the Susan Thomas Benck Aiken Professorship in Data Management, which will enable us to attract world-class professors interested in advancing the field of information systems."

To learn more about planned giving and the School of Business, contact Joey Broussard, director of major gifts, at (804) 827-7408 or jebroussard@vcu.edu.