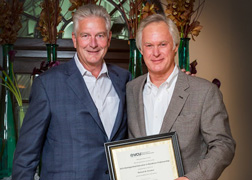 While it’s no secret that Hospital Corporation of America is a longtime supporter of Virginia Commonwealth University’s Department of Health Administration in the College of Health Professions, the health care giant managed to keep secret a special gift made in honor of its VCU alumni.

For six months, Richard Bracken (M.H.A.’77/AHP) knew nothing of the Distinguished Executive in Residence Professorship HCA established at his alma mater. The tribute was presented at his last board meeting in Dallas in October 2014.

“The gift was actually made last spring, but we kept it under wraps,” said Carolyn A. Watts, Ph.D., chairman of the Department of Health Administration. “It was more appropriate to announce it at Richard’s last board meeting, which certainly had special meaning for him after his long career at HCA. We’re so grateful that VCU was included in that special moment and grateful for the continued support of our programs and our students.”

The HCA Distinguished Executive in Residence Professorship will engage top health care executives with the Department of Health Administration and its students so that their academic preparation can be applied to the rapidly changing field of health care administration practice.

“HCA has a long and productive history with VCU, and many of its M.H.A. graduates have become leaders in our organization,” said Milton Johnson, HCA president and CEO. “The establishment of this professorship shows a continued commitment to VCU, a collaborative relationship for the future, and support for a program that we believe will ensure future generations of strong, innovative health care leaders grounded in a culture of putting patients at the center of care management. It also is a tribute to our many MCV/VCU graduates, particularly one of the most distinguished alumni, Richard Bracken, who recently retired as chairman of our board, and before that, had a long and successful career with HCA in many leadership roles, including as my immediate predecessor.”

Bracken is a generous supporter of the school. He and his wife, Judith, established the Richard M. Bracken Chair in 2012 with a $1 million gift to support the Department of Health Administration’s efforts to foster excellence in its teaching and research initiatives. In 2006, he established the Richard M. Bracken Leadership Award to recognize promising student leaders and played a significant role in the establishment of the HCA Emerging Healthcare Leaders Scholarship in 2005. He was named the Department of Health Administration’s Outstanding Alumnus in 2002.

“I am so pleased to see this commitment to continued partnership between my two alumni organizations, VCU and HCA,” Bracken said.

“Together, they represent the best in health care leadership both striving for excellence, both fostering a culture that encourages leaders at all stages in their development to be guided by what is best for the patients, organizations and the communities they serve. I look forward to seeing more great results from this effort.”

The professorship provides financial support to bring health care leaders to campus where they can share real experiences, case studies and trends with students in the evolving and fast-paced health care administration industry.

“This generous gift symbolizes our past and our future,” Watts said. “The professorship honors our past connection and signals that we’re going through a tumultuous future in health care together. It helps us make it real for our students.”