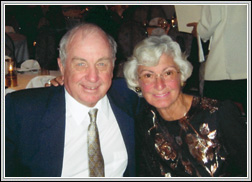 For nearly 15 years, O. Jean Renick made annual gifts to a scholarship fund in the Virginia Commonwealth University School of the Arts. The Charles Renick Scholarship held special meaning for her.

In 1985, friends and alumni created the scholarship when Renick’s brother, Charles, retired from the school’s sculpture department. Charles Renick, who earned his bachelor’s and master’s from VCU, served 32 years as a professor and two-time department chair. He passed away in 1987.

In 1995, Jean Renick started making annual donations to the fund on behalf of her family, contributing more than $50,000.

This past January, she lost a three-year battle with cancer, and her will included a bequest to the School of Arts, designating $20,000 to the scholarship.

“Thanks to Jean’s generosity, the Renick legacy will live on in a meaningful way for many students in the future,” said Connie Brown, alumni coordinator for the sculpture department.

The Charles Renick Scholarship was awarded to junior Conor Backman and senior Michael Muelhaupt, who each received $1,500 toward their tuition for the 2009 fall semester.

Muelhaupt, who works full time in the sculpture department’s woodshop while pursuing his degree, is grateful for the award. “Making art can be expensive,” he said. “It’s important for students to have the ability to create art without the financial stress.”

Renick and her partner of 33 years, Mike Maxwell, met the Charles Renick Scholarship winners each year.

“The students would always tell me how much fun it was to meet her,” Brown said.

Renick acquired her endearing personality from her dad, Maxwell said.

“Jean’s father enriched the lives of many people in the community through his generosity, wisdom and counsel — traits that Jean inherited honestly. She was a very giving person, and her philanthropy spoke for that,” he said.

In addition to her support for VCU, she was a regular contributor to many other groups. She even hoped to dedicate her career to giving back and helping others, earning her bachelor’s in nursing from Duke University. After graduating, however, she decided to help her father negotiate a land purchase in Williamsburg, Va., for the Anheuser-Busch Corp., today home to Busch Gardens, the Kingsmill residential community and Busch Brewery, Maxwell said.

In retirement, Renick and Maxwell became world travelers, often taking cruises, visiting Bangkok, Bali, Australia and Russia, among other places. Renick’s bequest to the school cements her legacy of giving, as well as that of her brother, said Jayne Shaw, associate dean for development in the school.

“Bequests like this are a wonderful way to not only augment existing scholarships but also to honor the memory of a loved one,” Shaw said. “They are also a good way for people to continue their philanthropy during these challenging economic times.”