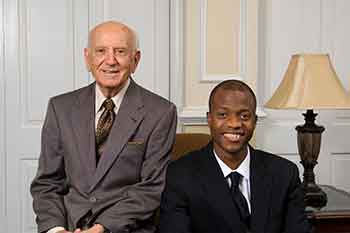 They come from worlds apart, but two families with origins far away from Richmond, Virginia, share a common bond on the MCV Campus of Virginia Commonwealth University.

A graduate of the Royal College of Medicine in Baghdad, Iraq, Joseph Gazala, M.D., came to the United States in 1953 for specialty training in ophthalmology at the New York University Post Graduate Medical School at Bellevue Hospital in New York City. In 1958, he and his wife, Rose, moved to Richmond, where he started his private practice.

The couple grew to love the city as well as VCU, where Gazala served as an assistant clinical professor in the Depart­ment of Ophthalmology.

Likewise, with his three siblings and his mother, Samuel D. Sessou came to Sterling, Virginia, from Togo in 1996. His father had arrived five years before, in search of a better life. Three years ago, with an interest in health care and an undergraduate degree in neuroscience from the College of William and Mary, Sessou entered the VCU School of Medicine’s Class of 2017.

Sessou is the first recipient of the Joseph R. and Rose N. Gazala Scholarship, which the Gazalas established in 2012 with a gift of $100,000. They had been inspired by stories they had read in campus publications of others who had been helped by private philanthropy.

Since 2013, Sessou has received more than $13,000 from the scholarship, which is awarded on the basis of financial need as well as merit, to help pay for his medical education. As long as he stays in good standing at the school, he’ll continue to receive benefits through his final year.

Sessou and Joseph Gazala met for the first time last summer over lunch. It gave them a chance to share experiences and get to know each other.

“Sam is a bright young man,” Gazala says. “He and his family spoke French when they arrived, so he spent the first few years learning English. He was determined to make it and to work hard. His mind was set at that young age to become a doctor.

“It’s not easy to come up with money for all the expenses, and he said the scholarship has filled a gap for him,” Gazala continues. “At the time I was going to medical school, my family was under financial stress − my father had passed away 20 years earlier − so I feel for those students. It’s not easy for them.”

Sessou, whose younger sister, Rebeka, is a VCU freshman, says it’s hard to articulate how grateful he is to the Gazalas for their financial support.

“It makes things a little bit easier,” he says. “I’m not com­ing from a financially stable family and, to know that there is financial aid out there, especially scholarships like the Gazalas’, is amazing.”

Sessou thinks he might return to Togo at some point to give back and to share his knowledge, or start a clinic of some kind.

“You have to return to where it all started. If you’ve been blessed enough to advance in your life, you have to turn around and give back to those in the area from where you came. It’s important in my upbringing,” he says.

The Joseph R. and Rose N. Gazala Scholarship is part of the School of Medicine’s 1838 Campaign, which aims to increase the number and size of scholarships to give the school a competitive edge in recruiting top students, rewarding student excellence and reducing the burden of debt that has become an inescapable part of choosing a career in medicine.

“Although he didn’t earn his degree from our medical school, Dr. Gazala knows what it’s like to be a medical student facing a seemingly overwhelming financial burden,” says Dean of Medicine Jerry Strauss III, M.D., Ph.D. “I am grateful that the Gazalas have chosen to so generously invest in our medical students. Their gift will help the School of Medicine attract talented students who will carry forward Dr. Gazala’s vision of excellence.”

To learn more about the 1838 Campaign in the School of Medicine, contact Tom Holland, associate dean for devel­opment, at (804) 828-4800 or tehollan@vcu.edu.