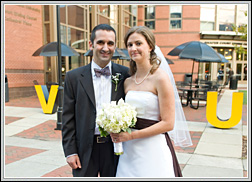 Virginia Commonwealth University School of Business alumnus Howard Rose was searching for a unique way to propose to his girlfriend, Melissa Reekes, also a VCU graduate, when he received a flier promoting the VCU Foundation’s Pathways Brick Campaign.

He was familiar with the concept as he had already purchased a brick in a pathway alongside the VCU Stuart C. Siegel Center.

“The minute I got the thing in the mail I thought of it,” Rose said.

He soon purchased a brick and requested his marriage proposal as the inscription.

On May 3, 2008, Rose asked Reekes if they could take their dog, a Labrador named Michaux, for a walk near campus. Reekes suspected something was up — they didn’t usually come to Shafer Court to walk the dog, and she said Rose was acting funny, making out-of-character comments.

Rose stopped near his proposal brick in the pathway of Shafer Court, but his smooth plan was foiled when a woman approached the pair and started asking questions about the couple’s dog. As the woman talked, Reekes said she looked down and saw the brick with the inscription, “HLR Loves MAR. Will You Marry Me?” She looked back up at Rose, who tried to speak but was again interrupted by the passer-by. He waited until she moved along and then officially popped the question.

The couple was married Oct. 18.

Although they didn’t meet in college, the couple said VCU is a special place to them and that attending the university is an experience they both share. Rose earned his M.B.A. from VCU in 1997, while Reekes received a bachelor’s degree in fashion from the School of the Arts in 2000 and a master’s degree in education five years later.

“We are both big Rams supporters,” Rose said.

The couple holds season tickets for men’s basketball, he’s a lifetime member of the VCU Alumni Association and she’s an adjunct instructor in the fashion department.

“When you go to college or you go to grad school, it’s a place of new beginnings. It can almost be seen as something like that. VCU means a lot to both of us. … It’s signifying our new life together,” Reekes said.

Pathways Brick Campaign
The Pathways Brick Campaign, established in 2002, encourages alumni and friends of VCU to purchase inscribable bricks to be placed along the pathway in Shafer Court. More than 500 alumni and friends have purchased 1,053 bricks. New bricks cost $150. Funds from this project help the VCU Foundation support the academic programs on the Monroe Park Campus and assist with the VCU Rice Center, the VCU Honors College and the Department of Intercollegiate Athletics.