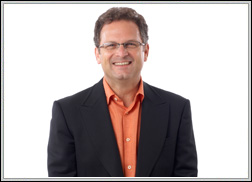 Bob Scarpelli began his career as an advertising copywriter and rose through the ranks to become chairman and chief creative officer of DDB Worldwide.

“In 2009, I will celebrate my 32nd anniversary with our company. I started when I was 11,” Scarpelli joked.

As head of New York-based DDB, one of the highest-revenue advertising agencies in the world, Scarpelli has helped direct more than $150,000 in support to Virginia Commonwealth University’s Brandcenter, which has earned a reputation for training the best advertising talent of the future. In addition, Scarpelli and his wife, Janice, have supported the Brandcenter personally by naming a classroom in the center’s new building.

Scarpelli’s support for the center was spurred by his friendship with Rick Boyko, who took the helm of the Brandcenter in 2003 after a hugely successful advertising career.

The pair have been friends since 1997, when they served on the jury of the Chicago International Film Festival.

“I always admired his work, and we got to know each other, our wives got to know each other and we’ve been great friends since,” Scarpelli said. “I got involved with VCU when Rick decided to retire, if that’s the word, and move to VCU. He asked me to be a board member off the bat, and I was pleased and honored.”

Scarpelli has served on the center’s board of directors since 2003 and has visited the Brandcenter many times.

“Bob was one of the first to understand the significant value and purpose of the program. When I took over, I asked him to help out, and he’s been a great supporter,” Boyko said.

DDB Worldwide and the VCU Brandcenter have a “strong working relationship,” Scarpelli said. In addition to providing funding for the Brandcenter, DDB offers the Bill Burnbach Minority Scholarship to VCU students.

“I want DDB to be known as a company that’s attracting the most talented young people to our industry,” Scarpelli said. “It’s our obligation and responsibility to keep finding people with new ideas, people who can look at things in new and fresh ways. Young talents, people with ideas, are the lifeblood of our industry.

“Programs like VCU’s Brandcenter hone and direct those talents. Creativity on demand is what we do, and the Brandcenter is really preparing kids to come in, hit the ground running and really contribute right away.”

Gifts from DDB and other corporate donors allow the VCU Brandcenter to continue to reflect the evolutionary nature of the advertising and communications business by continuing its mission to be “navigators of change” for the industry. Financial support is crucial to enhance academic programs, facilities and student scholarship offerings, said Beth Harrington, senior director of development for the Brandcenter.

“Corporate philanthropy really makes a difference in our endowment campaign, in terms of dollars and as an endorsement that we are indeed supplying the industry with the future talents and leaders,” Harrington said. “We are grateful for the friendship of DDB Worldwide and the Scarpellis especially.”

To make a gift to the VCU Brandcenter, contact Beth Harrington, senior director of development, at (804) 828-8384 or ekharrington@vcu.edu.