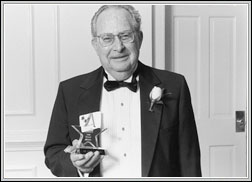 It takes a lot to surprise Louis Harris, Ph.D.

But his friends and admirers on the MCV Campus and at the MCV Foundation, with the assistance of his wife, Ruth, managed to pull off a big one.

At the MCV Foundation’s annual dinner in June, Harris was awarded the W. Robert Irby, MD Award as the outstanding MCV Campus faculty philanthropist. The award was established by the foundation in memory of Dr. Bob Irby, who was renowned for his fundraising prowess, which nearly equaled his patient-care and diagnostic skills. Previous winners are Drs. George Vetrovec, Richard Wenzel, Harry Young, Gordon Ginder and A. “Berry” Fowler.

In theory, Harris, 79, is retired, but you’d never know it judging from his travel, research, grant-writing and fundraising activities. He has won every award given by and has held every office in the national and international professional societies of which he is a member. He also continues administrative duties as vice chair of the Virginia Commonwealth University School of Medicine’s Department of Pharmacology and Toxicology, overseeing a $15 million research program.

“The award was a very well-kept secret,” said Harris, relaxed in a comfy-looking chair in his office, which is lined with the awards and certificates recognizing his accomplishments and features a stunning painting of his wife. “I didn’t realize why everyone was so insistent I attend the dinner.”

He is a member of the MCV Foundation Board of Trustees, but this year’s dinner threatened to take second place to a professional meeting in Arizona. Thanks to his wife’s intervention, he headed home sooner than planned.

“It’s nice to be recognized, particularly by the board of the foundation. It’s nice in many ways because it recognizes people who are not necessarily able to give millions,” Harris said.

The Harrises have been generous to VCU, contributing more than $605,000 over the years. The first gift they made more than 20 years ago was to the Smith Building Campaign Fund. At the time, Harris was chair of the growing Department of Pharmacology and Toxicology, which needed a home.

“We were eager to get that building up,” he said, “so Ruth and I decided to make a gift to get things started.”

As the department and the university expanded, Harris identified another issue: the lack of endowed professorships.

“We were a relatively new university, with comparatively little endowment,” Harris said. “The only way to become first rate is to attract and retain the best faculty. It then follows that we will get the best students, and that’s what makes a university great.”

He has set out to do his share to remedy the first part of that situation — attracting the best faculty — with the creation of the Louis and Ruth Harris Distinguished Professorship in Pharmacology and Toxicology. In addition, in recognition of the growing “cross-pollination” within the university, the couple established the Louis and Ruth Harris Exceptional Scholar Professorship in Biomedical Engineering in the VCU College of Engineering.

To address the second issue — boosting the quality and number of students — Harris led the department’s fundraising initiative to establish the PharmTox Graduate Student Support endowment. The income from the endowment is used to increase the stipends of graduate students. Harris set the standard by making a major commitment and has tirelessly approached former students, faculty members and interested corporations about contributing.

Giving back is nothing new to the Harris’s, though. They both contribute to their alma maters (Harvard and Simmons College), and they established a family foundation to support research and training in dyslexia and other biomedical sciences. Ruth Harris is a dyslexia expert.

In addition, the couple created the Charles Allan Harris Merit Scholarship supporting film and photography students in the VCU School of the Arts. The award was established in honor of their son, who earned his bachelor’s in mass communications from VCU. He now runs a successful film production company in Richmond, Va.

For years, the couple also gave Harris Art Awards, in which they purchased works from VCU art students to be displayed on the MCV Campus.

“The cash awards to promising young artists offered an interface between the arts and medical students,” Harris said. “Our students often are so tied up with their studies, they don’t get a lot of exposure to vibrant things happening on the other campus.”

As a whole, Harris added, philanthropy — in any form — is vital to VCU’s continued success and growth. “As we plan for the next decades to expand the scope of our research, we need to develop the infrastructure necessary to attract the best. Ruth and I are happy to be a part of the private philanthropy community helping VCU reach the peaks of prominence it deserves,” he said. “We can’t count on the federal and state governments to provide the edge of excellence. We are going to have to find donors who are interested in investing in the miracles of the future.”

For more information about making a gift to any entity on the MCV Campus, contact Sharon Larkins-Pederson, the MCV Foundation’s senior development officer, at (804) 828-4599.