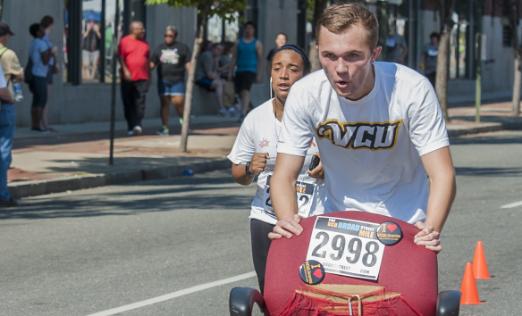 This year, more than 2 million students, faculty and community members will visit the James Branch Cabell Library in the heart of Virginia Commonwealth University’s Monroe Park Campus. Thousands more use the MCV Campus study spaces at Health Sciences Library for the Health Sciences. With that amount of traffic, wear and tear of the library’s furniture is constant.

The undergraduate committee, which advises library leadership on student priorities and needs, has playfully designed the project to resemble the process of adopting a pet – the pet, in this case, any one of Cabell’s tired “misfit chairs.” Those who support the cause with a gift of $25 or more are invited to take a photo with their “adopted” misfit chair to share on social media.

Earlier this year, Cabell underwent a renovation that included five floors of new or updated spaces and 1,500 new seats for students. State funding did not fully cover renovation of all spaces or replace furnishings in older sections of the building, so some chairs purchased as long ago as the 1970s remain in use.

CLUAC members Taylor Calicchia and Mack Edmondson noticed that the students sitting in the older chairs often looked tired and unfocused. They recognized an opportunity for students to get involved and pitched the Misfit Chairs Project to CLUAC.

“We hope that engaging students in getting new chairs will help everyone feel welcome,” says Edmondson, a fourth-year criminal justice student. “Comfort is critical to help students study efficiently for extended periods of time.”

Few services or places on campus are more vital to students than are the libraries.

“The library really does serve every unit and discipline,” says Antonia Vassar (B.A.’05/A), director of annual giving and donor relations for VCU Libraries. “Even a small gift to the Misfit Chairs Project will impact every student on campus, and the fact that students themselves wanted to have a hand in improving [the library] shows how much it means to them.”

Although the Misfit Chairs Project emphasizes student involvement, anyone can participate.

“The VCU community extends beyond campus and is full of people who feel connected to the university and want to support its students,” says Calicchia, a fourth-year biology student. “I would feel so encouraged knowing that [nonstudent donors] wanted to support a cause that is so important to my peers and me.”

Stephanie Holt (B.S.’74/E), president of the Friends of VCU Libraries Advisory Board, sees Misfit Chairs as the ultimate opportunity to support students.

“What better way is there to show support for VCU students than by supporting a cause that was their own initiative?” she says.

To learn more about VCU Libraries, contact Kelly Gotschalk (B.F.A.’90/A; M.A.’97/A), director of development and major gifts, at (804) 827-1163 or kjgotschalk@vcu.edu. To learn more about the Misfit Chairs Project, visit go.vcu.edu/misfitchairs.