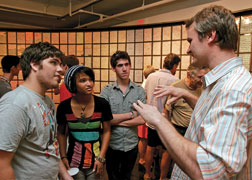 The landscape of downtown Richmond, Va., is about to change. In 2015, Virginia Commonwealth University’s new Institute for Contemporary Art will open its doors, providing opportunities for programming and collaboration with institutions around the world as well as community partners. Located at the intersection of Broad and Belvidere streets, the ICA will be the jewel in Richmond’s art crown.

“The ICA is a critical initiative for VCU,” said VCU President Michael Rao, Ph.D. “It’s an opportunity to enhance the creativity and community relations of the entire university. It is more than an innovative building and the linchpin of a vibrant arts district, it is a bridge that will help link VCU’s campuses, serve as a gateway to Richmond and help bring the arts community in Richmond the national and international renown it deserves. VCU School of the Arts is already ranked No. 1 among public arts universities in the country, and the creation of the ICA will expand its reach and influence immeasurably.”

Unlike a museum housing a collection or a gallery selling work, the ICA will be an institute dedicated to examining art in unexpected ways. Rising artists, as well as nationally and internationally recognized artists, will challenge visitors with new ideas.

Steven Holl, founder of Steven Holl Architects with offices in New York City and Beijing, is working in collaboration with BCWH Architects of Richmond on the project, which will be made possible through private funds.

“Sixty-three architecture firms from around the world submitted proposals — a record for any request for proposals in the history of VCU,” said Joseph H. Seipel, dean of the VCU School of the Arts. “To my great delight, the unanimous choice was one of the most famous, respected and sought-after architects in the world, Steven Holl.”

Holl’s extensive worldwide design work includes the Glasgow School of Art in Scotland, the Museum of Natural History of Los Angeles County in California, China’s Hangzhou Music Museum and the Herning Museum of Contemporary Art in Herning, Denmark. In December, he was named the American Institute of Architects’ 2012 Gold Medalist for his humanist approach to formal experimentation and his influence on the theory and practice of architecture.

Longtime VCU donors Kathie and Steve Markel and Pam and Bill Royall, tapped by Rao as co-chairs of the Campaign for the ICA, are assembling a leadership committee to help the school meet its $32 million fundraising goal for the project.

Holl specializes in integrating new projects into contexts with cultural and historical importance while emphasizing sustainable building and site development. Paul Goldberger, architecture critic for The New Yorker, cited Holl’s addition to the Nelson-Atkins Museum of Art in Kansas City, Mo., as “one of the best of the last generation.”

“We are very enthusiastic to be working with Virginia Commonwealth University to create architecture as a catalyst between the public and the great School of the Arts,” Holl said. “As a gate to the Monroe Park Campus, a sustainable example of architecture with a sculpture garden will act as a social condenser for the university and the community.”

Faculty members are equally enthusiastic about the far-reaching impact of the new facility. "Hands-on access to the exceptional culture of our day is what future artists need most," said Amy Hauft, professor and chair of the sculpture and extended media department in the School of the Arts. "The ICA will bring those exhibitions and artists to our doorstep."

To learn more about the Institute for Contemporary Art, contact Julia Carr, executive director of development, at (804) 827-4676 or carrj@vcu.edu.