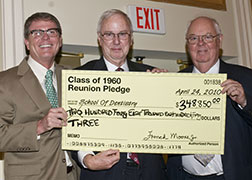 This past spring, the School of Dentistry’s Class of 1960 marked its 50th reunion by creating an endowed scholarship.

As class chair for the reunion effort, Dr. Robert Eshleman (D.D.S. ’60), faculty member and former chairman of the Department of General Practice at the School of Dentistry, organized a committee of six classmates who assisted in fundraising and planning the reunion event. The group encouraged planned giving and secured pledges that would be fulfilled over a period of years.

A $50,000 goal was set, and Eshleman, along with the other committee members, decided to start the fundraising effort with their own pledges.

“The [School of Dentistry] has been my life since 1956,” Eshleman said. “I felt this is where some of my estate should go. It’s been a good place for me.”

Eshleman named former Board of Visitors Rector Dr. French Moore Jr. (D.D.S. ’60) as the “fundraiser-in-chief” who increased the target goal to $100,000.

“The 50-year mark is a significant milestone, and French wanted his class to set the bar high,” said Dr. Jim Revere (D.D.S. ’65), the school’s director of planned giving and president of the MCV Alumni Association of VCU.

Moore, a second-generation alumnus, said he makes a point to give to his alma mater annually. His father, the late Dr. French Moore (D.D.S. ’22), was a longtime donor to the school. Moore’s son, Dr. French Moore III (D.D.S. ’82), is an adjunct faculty member at the Virginia Commonwealth University School of Dentistry who teaches senior-level dental students in his private practice in Abingdon, Va.

“My son recently shared with me that one of his dental students is $300,000 in debt for his education,” Moore said. “This level of debt is such a burden for students looking to start a practice or even a family.”

Creating scholarships for students is vital, and the involvement of alumni is crucial, said Jim Doyle, director of alumni engagement for the School of Dentistry. Last fall, VCU’s alumni associations initiated the $50 million Opportunity VCU scholarship campaign. The class gift supports that effort.

After the April 24 Welcome Back Alumni Reception at the Richmond Omni, the Class of 1960 dinner was held in the School of Dentistry’s Crockett Lounge. The lounge, located in the Lyons Dental Building, was named after former faculty member Dr. Bill “Willie” Crockett (D.D.S. ’47), a professor whom the Class of 1960 remembers fondly, Eshleman said.

Moore secured a few more pledges right before dinner. The following night, 250 alumni guests — from graduating classes with years ending in multiples of five — gathered at the Richmond Omni banquet hall where the total gift amounts from each class were revealed.

When Moore arrived, he shared an elevator ride down to the banquet hall with a fellow 1960 alumnus.

“I talked with him about making an estate gift and he made a pledge right therein the elevator,” Moore said.

As a result of Moore’s last-minute fundraising, Doyle drew a line through the amount inscribed on the oversized presentation check and replaced the figure with an amount $75,000 higher than the first. To date, the total class gift is $354,350.