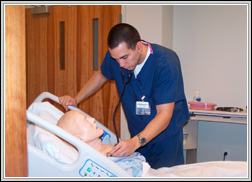 When Danny Phillips finishes his studies at the Virginia Commonwealth University School of Nursing in spring 2009, he’ll leave a huge void.

“Obviously I knew when I hired Danny that he would be graduating this spring, but now the reality is setting in,” said Sandra K. Voll (M.S. ’94; Cert. ’97), director of the Clinical Learning Center at the VCU School of Nursing where Phillips plays a leadership role as a student worker. “Danny Phillips is the best student worker we have ever had.”

A football player in high school in Winchester, Va., Phillips knew he wanted to pursue a career in health care but didn’t have a clear direction. He started in premed at the University of Alabama.

After two years, he decided to move home to Virginia to be closer to family and weighed his transfer options. He considered the University of Virginia and VCU, deciding VCU was a better fit. And, clearly, he made the right choice.

“VCU helped me really start focusing on my education,” Phillips said. “All I’m trying to accomplish now is directly because of VCU.”

Those goals include pursuing a master’s in nursing with a specialization in nursing administration and leadership, followed by a Doctor of Nurse Anesthesia Practice, both at VCU.

After graduation, he hopes to work in the Surgical Trauma Intensive Care Unit at the VCU Medical Center. His wife, Aimee, graduated from the School of Nursing in December and now works in the medical center’s Neonatal Intensive Care Unit.

Both of them, he said, really like the patient population they encounter as nurses at the VCU Medical Center.

“You treat people who are having a tough time, either financially or socially, and you really make a difference,” Phillips said.

He also likes the atmosphere of teaching that is pervasive at the hospital.

“I can spread what I know to others,” he said. “People are always passing down knowledge in this environment of learning.”

Voll touts Phillips’ ability to share his expertise, especially in the simulation laboratory, not only with students but also with faculty members.

“He is well liked, respected and sought out for his opinion, teaching and assistance by students and faculty,” she said. “Danny has a quiet, respectful way of caring that touches most every faculty member who interacts with him.”

Phillips’ respectfulness also is clear when he talks about the scholarships he has received, which have helped him pursue his dreams with less financial pressure.

The School of Nursing awarded him the Theresa A. Thomas Scholarship for the 2006-07 academic year and the H. Vaughan and Margaret D. Belcher Scholarship for 2007-08 and 2008-09. But he’s most proud of being named a Eugene P. Trani Scholar, the highest honor bestowed on students at the university.

The Trani Scholars program was created in 2006 by an initial $1 million gift from longtime benefactors Dianne and C. Kenneth Wright. The Wrights wanted to honor the vision, leadership and accomplishments of VCU President Eugene P. Trani, Ph.D., as he neared retirement. This past fall, 10 of the $5,000 scholarships were awarded.

When choosing recipients, the Wrights and a blue-ribbon selection committee look for areas of need, Dianne Wright said.

“As our society changes, so do our needs,” she explained. “We looked at nursing and biomedical engineering, for example, and really saw that we could make a difference. We found students who showed amazing promise in those areas.”

For Phillips, the honor is hard to wrap his head around.

“Anybody who knows VCU knows Dr. Trani. Having his name attached to the scholarship I earned … it just seems so prestigious,” he said. “I’ve done a lot to get to this point, but wow, I’m a Trani Scholar. Once you see his name, you have to feel proud about it.”

As for the Wrights, they hold a special place in Phillips’ heart.

“They are amazing people for the things they’ve done for VCU. Once I met them, I could tell how much they really care about VCU and about helping students get through school and making the best out of VCU,” he said. “I am very thankful to VCU and to the Wrights for what they’ve helped me accomplish.”