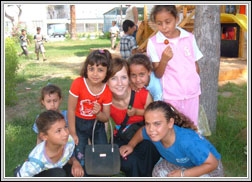 After graduating from high school, Jaime Bennett Stansbury planned to go to a liberal arts college in Pennsylvania. But she decided instead to take a six-month trip to work as an au pair and assistant kindergarten teacher in Lebanon.

Before she knew it, her short trip had evolved into a three-year journey. She moved to Jordan, studied Arabic in Amman and traveled throughout the Middle East.

Changed by her experiences, Stansbury decided to switch paths and apply to Virginia Commonwealth University. The draw, she said, was VCU’s diverse student population and the opportunities available in the School of Social Work. Just weeks before the start of her freshman year, Stansbury was surprised to learn she had been awarded the Dr. Grace E. Harris Scholarship, which is given to an incoming, meritorious, full-time freshman majoring in social work and is renewable for three years. For the 2005-06 academic year, Stansbury was awarded almost $2,000. She is now a senior and has received the scholarship every year of her education.

“I consider it an honor to be the recipient of a scholarship in the name of such a distinguished and accomplished woman,” Stansbury said.

From 1993 to 1999, Harris served as VCU’s provost and vice president for academic affairs. Harris also had served as dean of the School of Social Work, a position she held from 1982 to 1990. Her experience in the field before entering academia was memorable, she said, explaining that she spent time as a social worker and supervisor in the Hampton, Va., Department of Social Services and the Virginia Department of Social Services.

In 2000, the Dr. Grace E. Harris Scholarship was established by friends and colleagues following her retirement the year before. Harris can still be seen on campus today as she continues to provide oversight for the Grace E. Harris Leadership Institute, which works to strengthen leadership skills among faculty and staff of VCU and other institutions.

Shortly after starting at VCU, Stansbury decided to meet Harris to express her gratitude. The two have talked several times since that first meeting, and Harris says she couldn’t imagine a more deserving recipient of the scholarship. She describes Stansbury as someone who is bright, friendly and especially studious.

“She is a delightful young woman,” Harris said. “She has interests that certainly go far beyond what you would see in many students. She has quite a commitment to international social work and social welfare.”

“These scholarships, along with my part-time job at the Office of International Education, have made it possible for me to graduate this upcoming spring debt-free. I am deeply grateful for the financial freedom it will provide me to uninhibitedly pursue my future goals after graduation,” she said.

Without having to worry as much about funding her education, Stansbury has been able to fully commit herself to VCU. She has worked and volunteered in the Office of International Education, and for the past two years, she has represented VCU as a student delegate and presenter at the Women as Global Leaders Conference in the United Arab Emirates.

“I remember initially feeling like I would be out of place as a 22-year-old freshman, but I don’t think it’s possible to be out of place at VCU,” Stansbury said. “It is a university that supports and encourages differing views and experiences, and I have been pleasantly surprised by the opportunities I have had to pursue my personal interests during my time here.”

In addition to her accomplishments, Stansbury is a remarkable student for her ability to integrate academic knowledge and real-world experiences, Harris said.

“That becomes a rare skill — even with the training — to ultimately know how one’s own work can have an impact on an individual or community or group of people,” she said.

After graduation, Stansbury said, she will eventually pursue a master’s degree in social work or public policy and administration at VCU, but she has been offered a job helping to direct an elementary school in the Gaza Strip for a year, a position she might accept before returning to the classroom. After finishing her education, Stansbury hopes to work in community development or social services in the Middle East.

For more information about donating to the Dr. Grace E. Harris Scholarship or other scholarships in the School of Social Work, contact Terry Anderson, director of external affairs for the school, at (804) 828-0410.