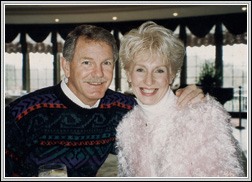 Donor aims to advance the field of palliative care

The days he spent in the palliative care unit were the most serene of his illness, Gloria Oates said.

“The palliative care staff was so skilled and compassionate. He was peaceful, and we were able to just stand around him and love him,” she said.

Oates realized some of the pain her husband had endured before moving to the unit could have been relieved sooner had she known about palliative care.

Palliative care deals with pain and symptom management in patients with serious illnesses. The main goal is to improve quality of life for these patients.

Oates also became a champion for the cause. She began by contributing funds and energy toward sprucing up the 11-bed unit and its family room.

But her philanthropy did not stop there. Oates met with Massey’s palliative care program co-founders, Thomas Smith, M.D., and Pat Coyne, R.N., to discuss their needs. As leaders of this fast-growing form of care — Massey is one of six model training sites for palliative care in the nation — Smith laid out the case for creating an endowed chair in palliative care, which he now holds.

“It helps enhance the prestige of palliative care to the same level of cardiology and oncology,” said Smith, director of the palliative care unit. “It keeps getting harder and harder to do all the clinical care alongside the need for research and teaching, and one of the best ways to free up time for research and teaching is to have an endowed position.”

Fundraising began with a substantial gift from the now defunct Thomas Hospice Palliative Care Foundation, led by former trustee Barbara Hughes. With the aid of many other grass-roots contributors, the goal of $1 million was reached. Oates was one of the leading contributors, providing support through personal funds and raising money through an annual golf tournament, sponsored by the Prince George Ruritan Club.

“I’ve always considered pain and symptom management and good communication as core skills of oncology as opposed to just treating the disease,” he said. “Luckily the field of medical oncology has moved substantially toward that direction.”

Rosemary LaVista, executive director of development for Massey, explains that the palliative care chair is unique because, while most endowed chairs are created by a single donor or by a family, more than 100 people made a gift to support this initiative.

“That speaks to the commitment of so many people to the need to recognize and support this model palliative care program — and to the conviction that Dr. Smith should receive this high honor,” LaVista said. “Even the staff and volunteers, led by Barbara Geer, who offered a matching gift challenge, got involved. The endowed chair in palliative care is a wonderful example of how private support can move important research forward as government funding is harder to secure.”

To make a gift to Massey Cancer Center, contact Rosemary LaVista, executive director of development, at (804) 828-1452 or rlavista@vcu.edu.