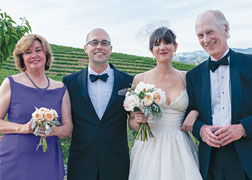 “I’m still in awe that it exists,” Ted Burdett (M.S. ’08) said of the scholarship created in his name at the Virginia Commonwealth University Brandcenter.

Burdett, an alumnus of Tulane University and of the Brandcenter’s second creative brand management class, is now an account supervisor on the Google Fiber account at San Francisco’s Venables Bell and Partners.

His road to Venables, though, wasn’t exactly smooth sailing.

“During a Tulane reunion, I met up with a few friends at the New Orleans Jazz Festival,” he said. “We started talking about what we were doing and a few of them were Brandcenter students. I remembered that my favorite undergraduate courses were in advertising.”

But instead of applying to the Brandcenter at his friends’ recommendation, he traveled to Thailand to teach English with the intention of bouncing from country to country to see the world and to experience different cultures.

“I got homesick in Thailand. It was hard to reach out to family and friends, and I started thinking about those conversations I had at jazzfest with my Brandcenter friends,” he said.

A quick review of the Brandcenter’s website rekindled his interest in advertising, and soon he was off on his next adventure as a member of the Class of 2008. During his second year of the program, he was diagnosed with stage IV Hodgkin’s lymphoma, from which he completely recovered.

“It was a place where I grew into my own a little bit and it was also one of the hardest times of my life. As I went through treatment for Hodgkin’s, my entire class and the school rallied behind me. It was very inspirational and very tough at the same time.”

Brad Armstrong, a family friend and partner at Richmond, Virginia-based Martin Agency, got to know Burdett when he arrived in the River City.

“Ted persevered through a really difficult time and he hung in there,” Armstrong said. “His story was inspirational. What better way to honor Ted than to create a scholarship in his name that could be given to students who had overcome difficulty.”

“Brad raised the idea with us, and we reached out to colleagues and friends to get it off the ground,” Ed Burdett said.

The Ted Burdett Scholarship is merit-based and has been awarded to six students.

“It honors Ted and his effort to keep going,” Claire Burdett said. “And it also honors students with talents and skills who need financial help.”

The Burdetts contribute to the scholarship every year.

“The Ted Burdett Scholarship is a particularly special one to us because it is currently the only scholarship fund we have that honors an alumnus of the program,” said Brandcenter Director Helayne Spivak. “Ted is active in reviewing the scholarship applications himself, which is meaningful because he has been through this rigorous program and knows what it takes to succeed. We are lucky to have the Burdett family’s support.”