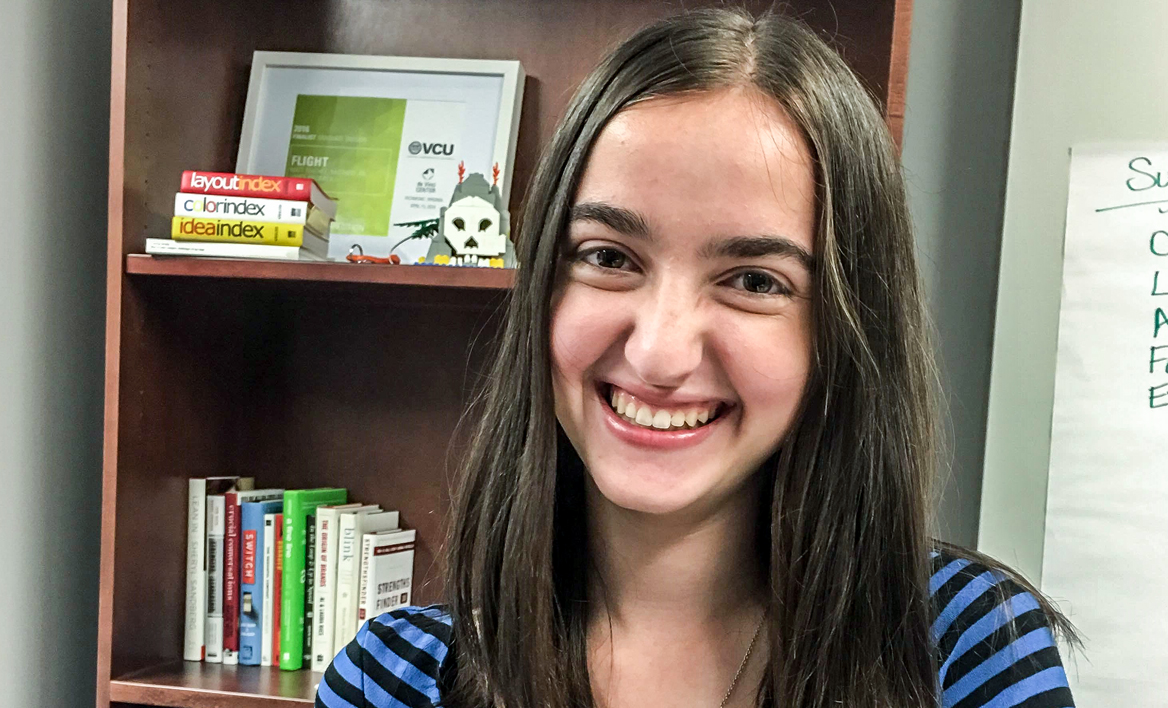 An idea that stuck

Sierra Semel, a second-year mechanical engineering student in the Virginia Commonwealth University College of Engineering, is constantly coming up with creative ideas for new products. Last fall, what started as an ordinary class assignment grew into an unexpected opportunity to see what it takes to bring an entrepreneurial idea to life.

The assignment required Semel and her classmates to submit an idea to OpenIDEO, a global community of innovative thinkers exploring solutions to problems through online challenges.

Each challenge runs for several months at a time and focuses on a specific issue. This time, it was reducing food waste.

“As a busy college student, I often lose track of exactly when I buy my groceries,” Semel says. “I wondered what would happen if, somehow, I could be alerted when the groceries I bought were about to go bad.”

Using Expire, shoppers could scan their grocery store receipts and arrange that data into a “digital pantry.” On future trips to the store, users could review the contents of their pantry to prevent wasteful purchases of items they already have. Taking into account how long each item typically lasts, Expire then notifies the user as products approach their estimated expiration dates and even offers recipe suggestions.

Though Semel was proud of her idea, she was not sure it would stand out among the 450 other submissions. So she was surprised a few weeks later to learn that Expire had been selected, along with 40 other ideas, to advance to the “refinement phase” of the challenge. During this stage, Semel used feedback from the first round to develop her idea further.

With just two weeks to conduct research and adjust her proposal accordingly, Semel sought help from her peers in the Innovate Living Learning Program. Administered by the VCU da Vinci Center, Innovate enables students to take specific classes and live with other entrepreneurial-minded students from a variety of disciplines.

“It took a lot of work to refine my original idea for the app,” she says. “Without the help of my Innovate cohort, I wouldn’t have been able to accomplish so much in such a short amount of time.”

Semel has benefited from living on campus at the Grace and Broad Residence Center as part of the Innovate program, and her merit-based scholarships have meant she hasn’t had to worry about how to afford it.

“I’m from Glen Allen, which is close enough that I could live at home and commute to VCU, but that’s not ideal for someone like me who wants to be involved in extracurricular activities on campus,” Semel says.

The Mark A. Sternheimer Scholarship in Honors, a renewable award that Semel has held for two consecutive years, is awarded to multiple honors students in the VCU College of Engineering. In total, Semel has received $3,000 from the scholarship and used it to help with the costs of tuition, living and textbooks.

Semel’s Innovate cohorts include da Vinci Center students from VCU’s arts, business and engineering schools and the College of Humanities and Sciences. They were critical in helping her gather the data she needed to take Expire to the next level.

“The Innovate curriculum follows the da Vinci Center model in drawing on the strengths of each individual student and encouraging them to pool those strengths when they work together,” says Aaron Forrester, one of Semel’s Innovate instructors. “The ideas that come out of such a collaborative environment are phenomenal.”

It was Forrester who asked Semel and her classmates to participate in the OpenIDEO challenge, and when Expire advanced to the refinement phase, he reworked the class’s scheduled lessons to incorporate Semel’s project as an opportunity for hands-on experience. Some students conducted interviews in the community to gauge interest in an app like Expire, and others contributed by creating illustrations and stop-motion animation videos to prototype design concepts.

“It was helpful to work with peers who have a different way of thinking than I have as an engineering major,” Semel says. “That collaboration fueled my project and demonstrated how living on campus has enhanced my VCU experience.”

Barbara D. Boyan, Ph.D., dean of the VCU College of Engineering, is grateful for donors like Sternheimer, whose support is integral to the work of ambitious students.

“We are lucky to have a friend and benefactor like Mark Sternheimer, who provides so many of our students with opportunities they otherwise may not have access to,” Boyan says. “The financial support he provides to our students through scholarships allows them to take a dream or idea and make it real.”

“I want these students to have confidence in their ability to solve problems,” Sternheimer says. “They work hard and are using their talents to make a difference in the world.”

Although Expire was not selected to advance beyond the refinement phase, Semel believes in its potential. Since the OpenIDEO challenge came to an end, she has continued to work on the app and doesn’t plan to give up.

“I have a better understanding of what it takes to actualize an idea,” Semel says, adding that her first venture into product development won’t be her last. “I know I will put everything I’ve learned to good use in my future endeavors.”

To learn more about the College of Engineering, contact Michael B. Dowdy, chief development officer, at (804) 828-1475 or mdowdy@vcu.edu.