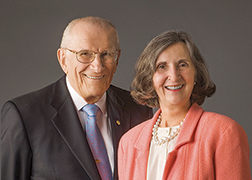 In February, the Pauley Family Foundation gave $5 million to support the expansion and enhancement of recruitment and research at the Pauley Heart Center at the Virginia Commonwealth University Medical Center.

"This is a project that is near and dear to my heart," said Stanley F. Pauley, whose Pauley Family Foundation has been a longtime supporter of VCU.

The Pauley gift will have an even bigger impact because of the generosity of another couple. Shortly before their deaths more than 55 years ago, Arthur and Margaret Glasgow included VCU in their estate plan. After the death of their last heir in 2011, the couple's philanthropic vision made possible a cash gift to VCU of nearly $45 million, the largest cash gift in the university's history. The gift was dedicated to research into cancer and other degenerative diseases and became the VCU Glasgow Endowment, which provided a dollar-for-dollar match for the recent foundation gift.

The philanthropic connection between Pauley and the heart center began in 2006, when the former heart center patient, impressed by the staff and treatment he received, directed his family foundation to make a $5 million gift to VCU for its heart center, which was later renamed Pauley Heart Center.

"The care these health care professionals provide is so genuine and moving that it is an honor to contribute to research that will enable them to learn even more about heart disease," he said.

The VCU Pauley Heart Center was among the first in the U.S. to implant the CardioWest temporary Total Artificial Heart, or TAH-t — the only total artificial heart approved by the U.S. Food and Drug Administration — and is known for many of its heart programs, including work in ventricular assist devices, electrophysiology, emergency cardiac care, atrial fibrillation treatment, cardiothoracic surgery and heart transplantation.

"VCU's progress as one of the nation's top 50 public research universities has been accelerated by a series of game-changers, and the Pauley Family Foundation's latest generous gift is another example," said Michael Rao, Ph.D., president of VCU and the VCU Health System. "Their continued support empowers my colleagues at Pauley Heart Center to save lives and improve the human experience throughout Virginia and beyond."

Also in February, VCU announced a fundraising campaign to raise an additional $5 million for the Pauley Heart Center. If the campaign reaches its goal, the money will be matched dollar for dollar by the Glasgow Endowment, too.

"The Glasgow gift was truly transformative," said Sheldon M. Retchin, M.D., M.S.P.H. (H.S. '79), senior vice president for health sciences and CEO of the VCU Health System. "It paved the way for a remarkable surge in our research efforts. Additionally, the Glasgow family had a philanthropic vision that is now becoming a reality."

"Our planned giving Heritage Society grows every year as alumni and friends see the benefit of making significant gifts utilizing bequests and trusts," he said.

These gifts to the VCU Pauley Heart Center, supported by the Glasgow Endowment match, will have a long-lasting impact, Retchin said.

"The Pauley family contributions will be felt for generations to come," he said.

To learn more about planned giving, contact Brian Thomas, senior executive director of development for the MCV Foundation, at (804) 828-0067 or bsthomas@vcu.edu.