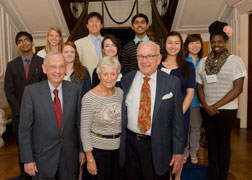 In a generous display of appreciation for the work of former Virginia Commonwealth University President Eugene P. Trani, C. Kenneth Wright (H.L.D.’11) and his late wife, Dianne, created a scholarship program in 2006 with a $1 million gift.

The Trani Scholars are selected, based on need and merit, from a pool of exceptional undergraduate applicants who wish to pursue studies in engineering, life sciences or health sciences. The selection committee is composed of former members of the Board of Visitors and a representative of the Wright family.

“Merit-based scholarships help VCU attract academically competitive students. Scholarships also allow students to focus on their academic work while at VCU, instead of focusing on how they will pay for their education,” said Sybil C. Halloran (M.U.R.P. ’99/H&S), assistant vice provost for student recruitment and admissions.

As a tribute to Trani’s 2009 retirement, generous individuals and organizations contributed to the Trani Scholars program, bringing the total endowment to nearly $1.4 million.

“When I see the smiling face of these young people, I get choked up sometimes,” Wright wrote in his 2013 memoir, “Why Stop at 65?” “To see and hear their gratitude is heartwarming.”

Trani Scholars retain their scholarship throughout their VCU careers, provided they remain in good academic standing.

“The Trani Scholarship is one of VCU’s most prestigious honors, and the internationally competitive students who receive it personify our profound commitment to academic, research and creative excellence in every discipline,” said VCU President Michael Rao, Ph.D. “We are proud of these great scholars and all that they contribute to our university community, in keeping with the legacy of President Emeritus Trani. I am so grateful to the Wright family for their wisdom and generous support of VCU and its remarkable mission. They have made a real difference for so many at VCU and beyond.”

Along with his late wife, Wright has generously supported many areas of the university, from the College of Engineering to the Massey Cancer Center. Wright is the retired president and owner of Wright Properties and Wright Investments and the retired chairman of Rent-A-Car Company Inc., an Avis franchise he operated for more than 45 years.

The gifts they provided to the Trani Scholars, however, are priceless.

“The day I received the letter notifying me of the Trani Scholarship award, I was speechless,” said Ruth Oh (B.S.’14/H&S). “It was as if I had won the lottery - a one out of a million chance. Thank you.”

To learn more about the Trani Scholars program, contact Anne Hoffler, senior director of donor relations, at (804) 828-3383 or aahoffle@vcu.edu.