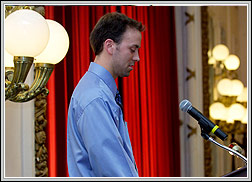 As a student in the School of Dentistry, Dave Dodrill had his share of trials and tribulations inside the classroom. His extraordinary ability to handle a tough situation on top of his course load, however, earned him a scholarship.

During spring semester finals of his sophomore year of dental school, Dodrill learned that his mother had been diagnosed with cancer. He wanted to leave school immediately and head to Montana to help, but she asked him to finish finals before making the trip.

“Attempting to remain focused,” he said, “was the hardest thing I’d ever done.”

Just two months after her diagnosis, Dodrill’s mother lost her fight with cancer.

While taking care of things back home, he missed the summer semester of his year-round program. But Dodrill fought to stay on course, and that determination made him a good fit for the Thomas H. Tatum Scholarship.

“When I learned it had been decided by the class to nominate me [for the scholarship], I was floored. In their own quiet way, they were respectfully acknowledging via the Thomas H.Tatum scholarship what my family and I had been through. It had not occurred to me that I had done anything noteworthy as I saw no other way to handle the situation,” Dodrill said in a speech given Oct. 22 at the second annual MCV Foundation Endowed Scholarship Brunch.

Established in 2005 by Dr. P.D. Miller and other fellow classmates of Thomas Tatum, a 1963 graduate of the School of Dentistry, the scholarship honors a dental student who demonstrates an ability to overcome adversity with grace.

“The concept of acknowledging a person for their experiences can be applied to a larger scale,” Dodrill told the brunch attendees. “It embodies the concept of scholarship donation.  It is a way for us to acknowledge the struggles and toils that students deal with every day.”

Dodrill graduated in May 2007.

As a classmate and friend, Kevin Clifford is pleased that Dodrill was honored with the scholarship.

“I’m glad to hear Dave is getting more recognition for the difficulties he has overcome throughout some of the most academically demanding times we faced in dental school. [He] was able to juggle the demands of dental school while recognizing the priorities in life without missing a step,” Clifford said.

Karen Gilliam, associate director of financial aid for the school, works closely with dental students and sees first-hand how scholarships can make a difference in students’ lives.

“Scholarships are an excellent source to help students meet their budget expenses during the year. [They] can reduce the student’s overall debt burden by alleviating the student’s need to borrow loans when additional aid is needed,” Gilliam said.