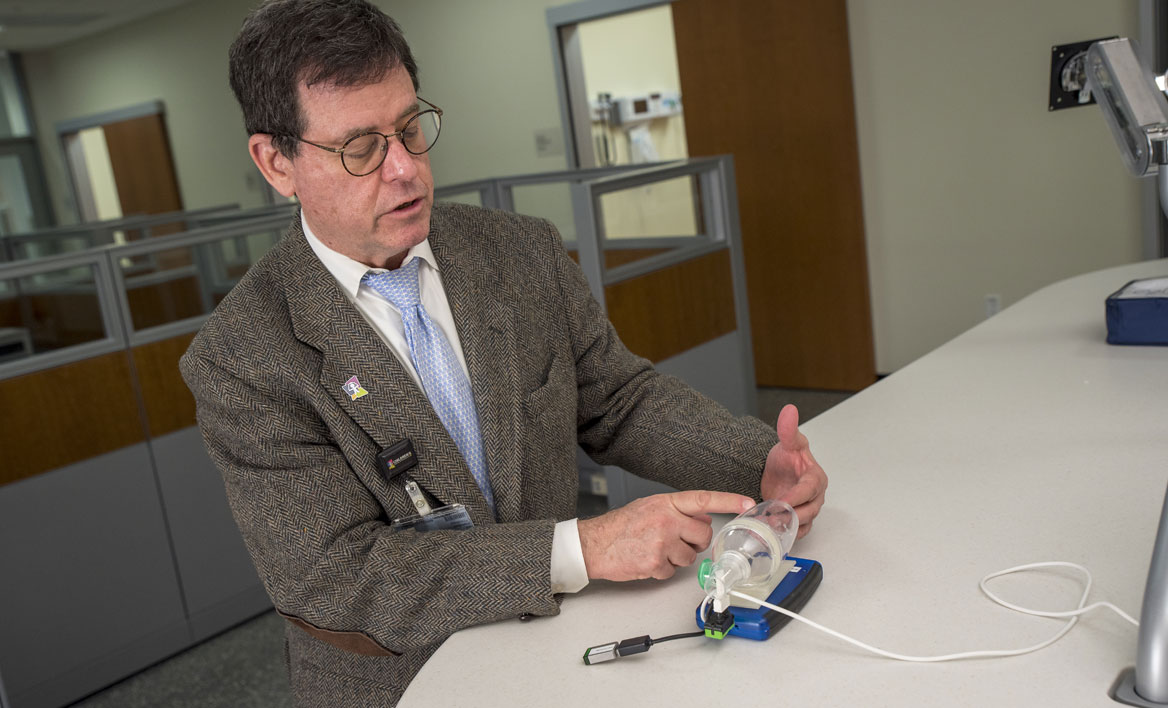 “Where I come from, engineers apply the principles of fluid mechanics to study how oil moves through pipelines in adverse conditions,” explains Rubin, who hails from Alberta, Canada. “I had the epiphany that if you look at bronchial tubes as pipelines and mucus as oil, you can use the same approach to understand it and improve therapy.”

The professor, who holds a dual appointment in Virginia Commonwealth University’s schools of Medicine and Engineering, leverages the best practices of both disciplines to develop and improve medical devices for children. This distinct approach has made him a sought-after research partner. In 2011, the chief executive officer at Protec’Som, a startup aerosol company in Normandy, France, approached Rubin to partner on a new pediatric inhaler device aimed at helping children manage their inhaled therapy treatments.

Since that initial meeting, Rubin has led a team of researchers at the Children’s Hospital of Richmond at VCU in partnership with engineers at Protec’Som to create an inhaler that can determine if a child is using the device effectively and, if not, teach them how to improve their technique.

“We wanted our product to provide not just feedback but appropriate training,” Rubin says. “We wondered, if we could do that and make it reasonably affordable, what would that look like?”

The team has developed a prototype for an inhaler that collects data on particle size and flow of the medication using light refraction. That information is then communicated via radio frequency to a program that calculates the speed, volume and success of each inhalation based on the principles of fluid mechanics. A system of red, yellow and green lights on the device indicates whether the child needs to inhale faster or more slowly to optimize intake.

“This could be a breakthrough for patients with a variety of conditions,” Rubin explains. “It’s currently designed for me-tered-dose and dry powder inhalers, which are used to treat asthma, chronic obstructive pulmonary disease, cystic fibrosis or any airway disease where you would want to administer a drug by aerosol.”

The invention garnered international honors at the 2017 Prix Galien International Awards, which promote significant advances in pharmaceutical research. Each year, a jury of clinicians, toxicologists, pharmacologists and pharmacists select the most important drugs introduced into the public market as well as recognize the achievements of the best research teams in the pharmaceutical field. Rubin’s work with Protec’Som won in the category of Best Collaboration with Academia Leading to a Breakthrough.

“We are proud to see Dr. Rubin and his collaborators honored with this impressive award,” says Peter F. Buckley, M.D., dean of the School of Medicine. “Dr. Rubin applies his dedication and ingenuity to improving children’s lives – and this technology has the potential to do that very thing.”

Rubin’s expertise has been an important factor in the success of the Atlantic Pediatric Device Consortium, a U.S. Food and Drug Administration-funded collaboration among VCU, CHoR, the Georgia Institute of Technology, Emory University and Children’s Hospital of Atlanta to further the development of medical devices for children.

“He can identify a clinical need and participate actively in the design and development of the device that meets that need,” says Barbara D. Boyan, Ph.D., Alice T. and William H. Goodwin Chair and dean of the VCU School of Engineering, who serves as a co-director of APDC.

Rubin joined VCU in 2009 as the Jessie Ball duPont Distinguished Professor, with appointments as chair of the VCU School of Medicine’s Department of Pediatrics, physician-in-chief at the Children’s Hospital of Richmond and professor of biomedical engineering in the VCU School of Engineering.

The professorship was established after industrialist, financier and philanthropist Alfred I. duPont died in 1935 and left the majority of his estate to the Alfred I. duPont Living Trust to be used to support advancements in pediatric medicine. In 1984, the trust made a $350,000 gift to establish the Jessie Ball duPont Distinguished Professorship, named for duPont’s wife, who also gave money to the Medical College of Virginia and the care of children during her lifetime.

“Endowed faculty positions in the School of Medicine are essential in recruiting, retaining and rewarding the ac-complishments of distinguished scholars such as Dr. Rubin,” Buckley says. “These positions are offered to the best and brightest in their fields, bringing recognition to the holder and the institution.”

These positions also provide flexibility for physicians and scientists to pursue groundbreaking research and collaborations like that between Rubin and Protec’Som.

“Partnerships between industry and academic professionals are so rich,” Rubin says. “With constrained funding for basic and translational research, it is more important than ever to have the ability to partner with companies to do really meaningful research that benefits patients. Having that entrepreneurial spirit is going to be critical for the future of translational development for our patients.”

Sharing this trailblazing attitude, Rubin says, has been fundamental to the success of his work with Protec’Som.

“We have a shared vision, a similar enthusiasm and a common goal for the project,” he says.

Rubin meets regularly with his partners at Protec’Som as the inhaler is developed further. Next, the device will be reviewed by the U.S. Food and Drug Administration and the European Medicines Agency. If it’s approved, initial clinical trials can begin. Rubin hopes that studies in patients will be conducted at the Children’s Hospital of Richmond at VCU by the end of the year.

To learn more about the Children’s Hospital of Richmond at VCU, contact Lauren Moore, director of development for VCU Health, at (804) 828-4100 or lauren.moore@vcuhealth.org.