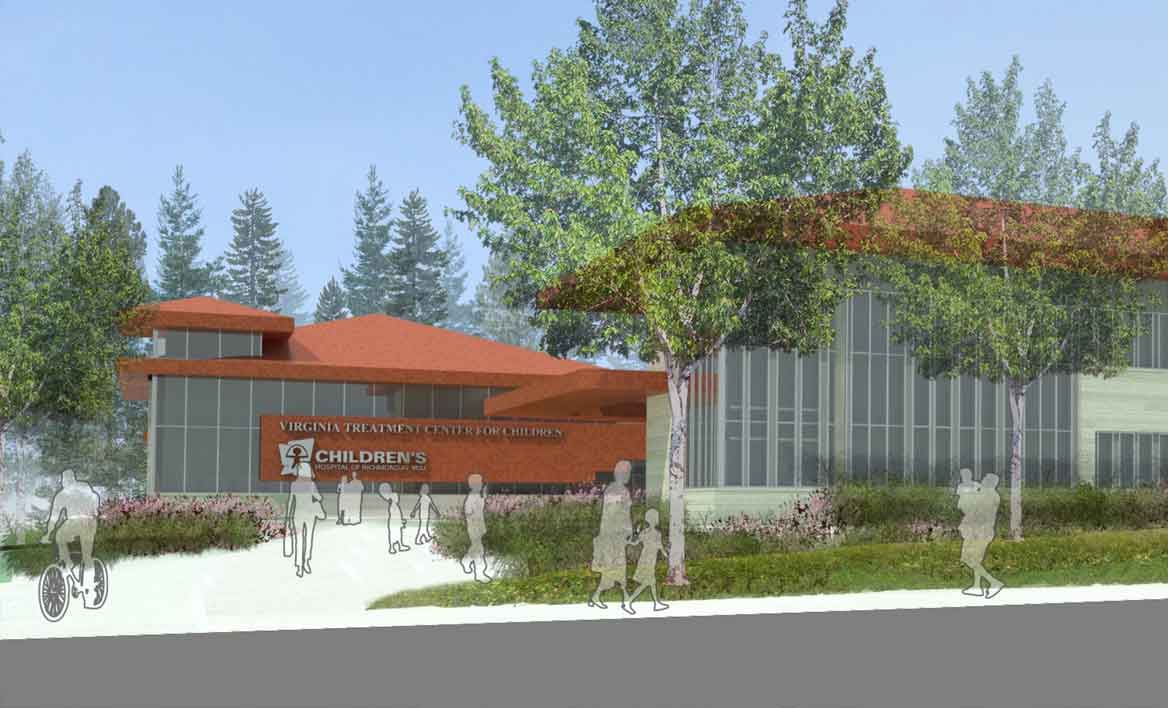 Opening this year, the new Virginia Treatment Center for Children is poised to radically overhaul mental health care for the region’s youth

Ruth Hays Burke (M.T.’09/E) was about 9 when her struggles with anxiety led her to the Virginia Treatment Center for Children. She has never forgotten how it felt.

“I was overwhelmed and scared,” Burke says.

The building opened in 1962 as a state-operated research, training and treatment facility for mentally ill and emotionally disturbed children and adolescents.

“The lobby was very dark. The colors – it was all these dull, dirty yellows. There was no natural light and few windows. The lighting was really bad. And the smell – if you were to bottle it up, I could identify it in a second.”

In the gloomy waiting room, Burke recalls looking around at the other children there and wondering, “‘Why are we all here? What are they trying to fix with you? Are we alike? What’s going on?’”

The Virginia Commonwealth University VTCC provides services to children ages 3 to 17 for mental health issues ranging from depression and ADD/ADHD to anxiety, autism spectrum disorder and behavioral problems at home and school.

As they waited, Burke’s mother explained to her that some children were inpatients. “That was terrifying,” she says. “I was really worried she was going to leave me there.”

Burke’s path to the VTCC had been a long one. She had experienced anxiety throughout her childhood, and by the time she was in fourth grade, it was manifesting in an obsession with perfectionism at school, among other things. She saw physicians, counselors and various specialists and was tired of the Rorschach tests and talking about her feelings.

“By the time I had gotten to the VTCC, truth be known, I didn’t want to be going anywhere,” Burke says.

But despite the negative impressions of her surroundings, which stayed with her throughout the entire course of her experience, her arrival there marked a major turning point in her life. She was diagnosed with anxiety and obsessive compulsive disorder. Her doctor, the first specialist in the field she’d seen, put her at ease with his specific, relatable questions, and he paired his behavioral treatment with a medication that relieved her symptoms. The VTCC had provided a foundation for how she continues to manage her mental health to this day.

Burke returned to the VTCC recently, about 25 years after her first visit. “Though they’ve done a good job trying to brighten it up, it’s still very similar to how I remember it,” she says.

But while the VTCC hasn’t changed much, the mental health landscape has.

“Unfortunately, it’s a growth industry,” says Joel Silverman, M.D., the James Asa Shield Jr. Professor, chair of the VCU School of Medicine’s Department of Psychiatry and a practicing psychiatrist. “No. 1, the suicide rate is going up. Two, more children are being diagnosed with autism and other brain disorders than 10 or 20 years ago. Three, there is an opioid epidemic and crisis in the commonwealth of Virginia. Four, there are not enough properly trained professionals to deal with the community need. Five, our department receives 1,200 calls asking for help every month, and we can only take in a small percentage of those cases.”

Hand-in-hand with an increase in diagnoses and in the societal problems that result in a need for care, Silverman says, is a decrease in the stigma surrounding mental illness, leading to more people reaching out for help. While this is undeniably a good thing, it squeezes resources even more.

Last year, the VTCC cared for 990 children requiring inpatient care and had more than 7,000 outpatient visits. In addition to an infrastructure that has become increasingly unsuitable for modern mental health care, the facility is now dealing with a level of demand it cannot meet.

Thankfully, the number of children in Virginia who can be served, the speed with which they can be seen and the quality of their treatment are set to improve dramatically when a new, much-improved VTCC opens in fall 2017.

Currently under construction on the Brook Road Campus of the Children’s Hospital of Richmond at VCU, the new VTCC spans nearly 120,000 square feet. The current facility occupies 86,330 square feet.

“It’s like day and night,” Silverman says of the difference between the new and old facilities. “The old building was constructed as only an inpatient facility, and we’re using it for inpatient, outpatient, teaching and research, so we’ve had to use spaces flexibly.”

The new building features two extensive outpatient wings with 20 treatment rooms and specialized areas for art, music and play therapy, tripling outpatient capacity. Two 16-bed secure inpatient units will add an extra eight inpatient rooms to the current capacity and include private baths and accommodations for parents to stay with their children for the duration of their treatment.

In addition, the building includes a separate inpatient assessment and intake area; a therapy space for occupational, recreational, art, music and play therapy, along with telepsychiatry suites; a K-12 school program for all inpatient children; and a gym, dining areas and outside recreational areas and gardens.

“It’s going to be one of the most beautiful, welcoming, functional facilities for kids and families in the world,” Silverman says.

Burke has seen the plans for the new building and has talked to the architects.

“They’ve taken into account how the design elements affect our experience and our feelings when we walk into a place,” she says. “They have taken huge steps to make it feel very open. They are inspired by nature, so there are lots of curves and huge amounts of natural light. The courtyards, the outdoor therapeutic space, fresh air – they understand how important all these elements are not only to those who will be treated there and the family members who will be coming but also to their own staff.”

The new VTCC is the result of a $56 million state appropriation from the Virginia General Assembly in 2013. That covers construction and fittings, but not research, education and clinical-care programs, which need expansion.

That’s where the Healthy Minds Campaign comes in. The campaign is an ongoing effort to raise awareness in the community of the work of the Department of Psychiatry, which encompasses adult psychiatry plus clinical, education and research programs, as well as child psychiatry. It has a fundraising goal of $15 million.

Martha Estes Grover has co-chaired the campaign since its inception in 2011. In addition to her leadership role, she has given $1 million toward an endowment to support the VTCC. Half will create an endowed professorship in child and adolescent psychiatry; the other half will name a space in the VTCC in memory of her brother, a former patient.

“Martha clearly understands the importance of research and education,” Silverman says, “that if you teach pediatricians or residents and students who will become pediatricians about children’s mental health problems, they’re going to be able to go out into the commonwealth and do a better job for kids and families.”

As well as providing the funds that will recruit new professors, bring new programs to Virginia and provide outreach to area pediatricians, the Healthy Minds Campaign aims to raise awareness so parents are more comfortable about reaching out if their children are having issues.

“The stigma of mental illness needs to go away,” Grover says.

She remembers being at the VTCC with her schizophrenic brother, Michael, about 40 years ago.

“We just didn’t talk about it,” she says of her family at the time. “I often think of my mother and how hard it must have been for her struggling with a sick child. Helping families have access to resources is such an important component to obtaining treatment.”

As a child, Burke also remembers the stigma associated with seeking help and agrees that awareness is key.

“My parents didn’t know who to talk to, and they certainly weren’t talking to the neighbors about it,” she says. “The more we talk to each other about it, the more light we can put on things.”

Now 35 and a new mother, Burke is focused on helping young girls today do exactly that, by encouraging them to be open about their feelings and experiences as the director of Girls on the Run of Greater Richmond. A nonprofit youth development program for girls from 8 to 12, it combines emotional and physical training for a 5K run with lessons that inspire girls to become independent thinkers and good problem-solvers and to make healthy decisions.

“Girls now are dealing with an immense amount of stress,” she says. “It’s an opportunity to help them question some of the feelings, beliefs or issues that they may be experiencing or feeling.”

As for her mental health, Burke says, “it’s something I constantly have to check in on and figure out on a weekly basis.” The VTCC helped start her on that journey, but she knows that the road will be smoother for children treated at the new facility.

“I would hope that as soon as they arrived, they got a sense of enrichment, nurturing, welcoming and calm,” she says. “I just think the new building is going to provide a positive platform for the entire family.”

Silverman, too, is clearly excited to see the building on the brink of reality. But he’s also looking further ahead, to how the funds raised by the Healthy Minds Campaign will help maximize the potential of this state-of-the-art facility.

“We need to have better therapies, better diagnostic procedures and better medications with fewer side effects, and partnering with the community is a major vehicle for making it better,” he says. “We want to have more resources so people can get the help when they need it, so fewer kids will end up addicted, fewer kids attempt suicide and fewer kids end up in the juvenile justice system.”

To learn more about the VCU VTCC and the Department of Psychiatry, contact Lynn Meyer, director of development, at (804) 827-6297 or lynn.meyer@vcuhealth.org.