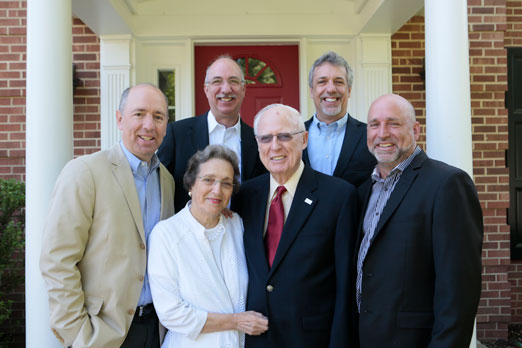 Rising to the challenge

With a matching-grant deadline approaching, new donors at all levels are making a big difference to the James Branch Cabell Library

Every donor has a motive for giving to any cause. But right now, the Richmond-based Cabell Foundation is providing a little extra incentive for giving to VCU Libraries. Last December, the Cabell Foundation awarded a $1 million grant that challenges VCU Libraries to raise $1 million in new gifts and pledges by June 30, 2017. When VCU reaches that goal, the foundation will commit $1 million, making a total of $2 million to support the library. As of June 30, VCU Libraries, having raised $465,370, was close to the halfway mark on its match. The challenge is designed to spur additional philanthropy to support the library – and it seems to be working. Here, three donors of differing amounts, whose gifts count toward meeting the foundation’s matching grant, tell how they reap double the rewards for VCU.

John E. “Jack” Hansan, Ph.D., spent his working life as a scholar and social worker in service to others. “Our family’s bonds of togetherness and mutual support were forged during my social work career, when our family of five sons moved five times,” Hansan says. “Ethel and our sons needed to be strong, flexible and supportive of each other in order to adjust to new neighborhoods, schools and environments.” The family moved for the last time in 1975, to Northern Virginia. Kevin (B.S.’81/H&S), Mark (B.S.’84/H&S) and Robert Hansan (B.A.’86/H&S) all graduated from VCU. While his sons built businesses, the senior Hansan’s varied career in government service, the private sector and politics included research and scholarship about the history of social welfare. He works closely with library archives and collections and keenly values the accessibility of library digital collections. He sees VCU Libraries as a pioneer in using digital platforms for scholarship.“We are very pleased to pledge funds from the Hansan Family Foundation to advance VCU Libraries,” Jack Hansan says.“Our commitment is intended to help University Librarian John E. Ulmschneider pursue his vision of a modern academic library that encompasses the technologies and tools for digitizing and archiving articles, documents and records not otherwise available today for the benefit of researchers, students and the public. His vision and approach parallel the careers and interests of the Hansan family members.”

Timmy Nguyen (B.S.’11/B) made his first donation to VCU as a first-year student. Today, he works for the federal government and serves on several boards in the community and at the university. The challenge grant and the opening of the expanded Cabell Library inspired his first gift to VCU Libraries.“I have always believed in the importance of giving back,” Nguyensays. “I was taught, ‘To whom much is given, much is expected in return.’ I wanted to continue to give back to VCU because of the opportunity it provided me.” Nguyen says the library is the perfect way to help every student with one gift. “No one graduates from the library, but the library plays an instrumental role for all of us who learned here and graduated from this terrific university. I know this gift will give students access to top-notch educational tools and resources and help them to pursue their dreams and goals.” Nguyen adds that a gift to the library represents an investment in the future of students and faculty. “This will allow us to continue to be a premier urban research university and remain competitive with every other institution around the country.”

With her pledge to VCU Libraries, Tehra James, Pharm.D. (Pharm.D.’14/P), is making her first large gift to VCU.“Giving doesn’t have to wait until you are 20 or 30 years out,” she says. “I want to do my part now to make sure we meet that fundraising goal.” The Cabell Foundation grant, she says, “encouraged me to be more aggressive in my giving than I would have been without it.” A nontraditional student, James earned two undergraduate degrees and had a career in business before beginning graduate studies at the VCU School of Pharmacy. She and her husband, Eric, made the donation to support a new mothers’ room on the fourth floor of Cabell Library. The Monroe Park Campus desperately needs private spaces for mothers to feed their babies or to express milk, James says. “I had many classmates who had children and babies. It’s very difficult to be a working adult student. We need to set the tone that VCU is welcoming to all ages and stages of students.” James is joining with members of WISDM – Women in Science, Dentistry and Medicine – to name the room. “We have a great new building, but it’s what you fill the building with that matters,” she says. Of her commitment to philanthropy, she says, “It’s easier to buy shiny new things than to invest in the next generation. VCU Libraries is just an organization that I care so much about.”