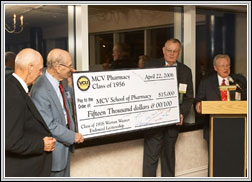 Alumni leave mark on VCU through an endowment tribute

The class wanted to provide continuing education to alumni during the annual Reunion Weekend while also showing its appreciation for Warren Weaver, Ph.D., who taught from 1950 to 1956 and became dean after the class’ final year of pharmacy school.

“We always said that we and Dr. Weaver all sort of graduated together. We graduated that year, and he graduated from being a professor in the pharmacy school to dean of the school,” said John Hasty, a 1956 pharmacy graduate who pushed for the establishment of The Class of 1956 Warren Weaver Endowed Lectureship.

Weaver’s former students describe him as an impressively intelligent professor and an excellent lecturer who is an approachable person with a great personality.

“He was probably the smartest professor I ever had in seven years of college. He was very able and a good deliverer,” said Tom Savage, a Class of 1956 alumni who made a gift to the lectureship. “I don’t think I ever went to another class and had a professor that was more knowledgeable than he was.”

For Weaver, sharing that knowledge with students served as a mission for his entire career. With such a love for the classroom, Weaver said the hardest part about being dean was leaving close student-teacher relationships behind.

“Frankly, I enjoyed teaching, and I wrestled some about being dean and giving up the greater part of my teaching,” Weaver said.

Weaver said he earned students’ respect by showing them the importance he placed on thoroughly teaching material. To make sure students grasped concepts, for example, Weaver said he would spend an entire class reviewing questions after returning an exam.

“From the beginning,” he said, “they knew what I expected from them.”

After graduating with the pharmacy Class of 1956, Gene White earned a law degree from the University of Richmond. He then picked up Weaver’s love for teaching and returned to his alma mater as a pharmacy professor. Having taught alongside Weaver for nearly two decades, White was inspired by what students referred to as “Weaver’s little pearls of wisdom.”

“He expressed himself in a very low-key manner, but when he spoke everybody in that school listened. You would stop in your tracks to be sure you heard what he said. His voice, his demeanor demanded respect,” said White, characterizing Weaver as a difficult but fair teacher.

As a faculty member, White got an inside look at the man who shaped so many careers and lives during his time at the School of Pharmacy.

“He was an absolutely brilliant individual. Nobody, faculty included, wanted to challenge his intelligence,” White said.

While White became dean of admissions for the School of Pharmacy and later professor emeriti, Hasty used Weaver’s training and the knowledge he gained to find great success. Hasty owned a pharmacy in West Point until 1988 and was appointed by then-Gov. George Allen to head the Virginia Department of Health Professions, a post he held for eight years.

Savage’s career is equally impressive. After graduating from the School of Pharmacy, he co-owned a pharmacy with his brother in Cape Charles for 41 years.

And they are just three success stories of more than 40 graduates of the class who were touched by Weaver.

“I’ve had a wonderful life, been very fortunate,” Hasty said. “I think I owe it all to my [background] in pharmacy and my pharmacy education and, of course, all of that came from MCV.”

Once Hasty and White decided this was the best way to show their gratitude to Weaver and the pharmacy program, they sold their former classmates on the idea. When fellow alumni heard about the plan in the fall of 2004, they responded enthusiastically, donating more than $14,000 for the lectureship in less than six months. At the class’ 50-year reunion, alumni presented Weaver and the school with a $15,000 check.

Weaver said the lectureship was a pleasant surprise, particularly coming from a class full of friends and exceptional students.

“I never even perceived that they would ever do that,” Weaver said of the donation. “It’s amazing.”

Now, White said, future generations of pharmacy alumni will continue to gain insight into working with people and improving health, all in Weaver’s name. Hasty hopes the lectureship will cement the legacy of a man he considers not only a fine teacher but also a great friend.

“A lot of professors stand out in your memory. Some professors tend to be more serious or fact-oriented and do an excellent job — they just don’t come across the way Dr. Weaver did,” Hasty said.

For more information about donating to The Class of 1956 Warren Weaver Endowed Lectureship or the School of Pharmacy, contact Ellen Firkins, director of development, at (804) 828-3016.