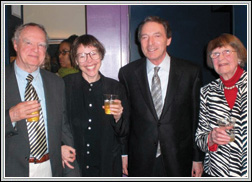 Adjunct French instructor Marcia Powell (B.S. ’79) passed away Sept. 30, 2009, at the age of 93. A renowned French teacher at the Collegiate School for more than 20 years, Powell dedicated herself to Virginia Commonwealth University long into her retirement. Powell inspired her students, friends and family with her love of learning, teaching, and religion and the arts, colleagues say.

Powell, who remembered fondly her student days taking classes from Cliff Edwards, Ph.D., professor of philosophy and religious studies at VCU, established an endowed lecture series in religion and the arts in April 2009. The Powell-Edwards Lectures in Religion and the Arts give tribute to their shared cultural interests, passion and vision for cultural enrichment.

Edwards recalls meeting Powell in 1975 when she was a student in the first class he taught at VCU, a study of the New Testament.

“I was surprised to have a woman older than myself in the class and found that she had been educated in Switzerland, taught French and knew far more about French art and culture than I did,” Edwards said.

When Powell brought to Edwards’ class a set of slides featuring 70 14th-century tapestries from the French Chateau of Angers that depict the Book of Revelation scene by scene, he asked if she would give a lecture on the topic.

“She did a wonderful job, and we began our lifetime of conversations on art, literature, religion and family,” he said.

Powell was invited to lecture in a series of arts-and-biblical-studies courses taught by Edwards.

He thought it was a great idea. Powell and Edwards chose Elizabeth King, artist and VCU professor of sculpture, to inaugurate the lectureship.

A crowd flooded the Grace Street Theater and overflowed into the lobby, where students sat on the floor to witness King’s lecture on a TV screen.

The second lectureship is scheduled for this April and will feature Naresh Bajracharya, Ph.D., a visiting Fulbright Scholar from Nepal. Bajracharya is the founding director of the Department of Buddhist Studies at Tribhuvan University in Kathmandu and an expert struggling to keep alive forms of Indian-Nepalese art and ritual that are in danger of being lost.

“This endowed fund provides programmatic support that would not otherwise be available,” said Lois Badey, director of development for the VCU College of Humanities and Sciences. “Through the Powell-Edwards Lectures, curricular and co-curricular programs offered by the School of World Studies and the religious studies program will be greatly enhanced — and most especially, the legacy of Marcia Powell will continue in perpetuity. We are grateful for the generosity of the Powell family and friends who established this lecture series.”

To make a gift to the Powell-Edwards Lectures in Religion and the Arts, contact Lois Badey, director of development for the College of Humanities and Sciences, at (804) 827-0856 or labadey@vcu.edu.