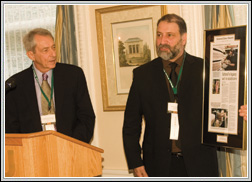 William R. O’Connell Jr., D.Ed., (B.M.E. ’55) died Oct. 19 in Williamsburg, Va., at age 76. Just before his death, he made a final gift to Virginia Commonwealth University, donating $42,000 for the construction of a cobblestone plaza to surround the Richmond Professional Institute commemorative sculpture, “Tableith,” located beside Office of the Provost.

O’Connell’s long history with VCU began when he was a student at RPI, the university’s predecessor.

Fellow alumnus and current member of the RPI Advisory Council Joseph Lowenthal (B.F.A. ’55) recalls when he and O’Connell ran against each other for the president’s seat in the RPI Student Government Association.

“We had fun campaigning against each other because we were friends,” Lowenthal said. “After he won, I did everything I could to support him.”

In 1957, only two years after O’Connell earned his degree in music, he was handpicked to serve as the first dean of men by RPI’s Dean of Students Margaret Johnson.

“He won over the administration,” said fellow RPI alumnus and former professor in the School of Medicine Ed Peeples (B.S. ’57). “His sterling performance as a student impressed [then-president Henry] Hibbs and Margaret Johnson because he had a presence that told you he was going somewhere.”

O’Connell earned a doctorate of education from Columbia University after his term as dean of men. He worked at the Southern Regional Education Board in Atlanta, and at the Association of American Colleges and the National Association of Student Personnel Administrators in Washington, D.C. In 1985, he became president of New England College in New Hampshire.

In 2007, he began a three-year term with the VCU Alumni Association board of directors and became an active member of the RPI Alumni Council, chairing its commemorative sculpture committee.

O’Connell invited Lowenthal to join the committee as it worked to commission and install the sculpture.

“Bill spearheaded the whole fundraising effort and worked with the artists to get some ideas,” Lowenthal said. “He was very happy about the sculpture’s completion.”

“Tableith,” created by artist Charles Ponticello (M.F.A. ’94), weighs more than 20 tons and includes 51 cast discs stacked atop one another in an upward spiral. Each disk is inscribed with historical information or key events from the years 1917-68. In 1968, the General Assembly created VCU using RPI and the Medical College of Virginia as its foundation.

The RPI commemorative sculpture committee also wanted to build a plaza around the sculpture using cobblestones unearthed from the alley behind Hibbs Hall. With his gift, O’Connell designated the area to honor RPI’s president and dean of students, naming it the Henry H. Hibbs and Margaret L. Johnson Plaza. The plaza will be dedicated April 24, during Reunion Weekend.

O’Connell saw the RPI group struggling to raise money for the plaza and decided to help by donating the remainder of funds needed for its construction, Peeples said.

“He thought of RPI just as the rest of us — [the college] took the working class and created academic achievers,” Peeples said. “Bill was a shining example.”

VCU Alumni Association Executive Director Diane Stout-Brown (B.S.W. ’80) said RPI alumni recognize the importance of integrating their history and memories into the future of VCU to ensure the foundation that VCU was built upon will never be lost.

“Although the name RPI no longer has an official recognition, they are loyal alumni who strive to see their great university flourish by giving generously of their time, talents and financial resources,” she said.

To make a gift to the VCU Alumni Association, contact Diane Stout-Brown, executive director, at (804) 828-2586 or dstout@vcu.edu.